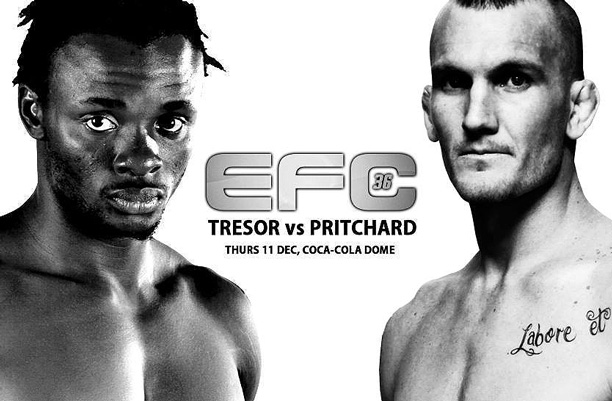 Cape Town (South Africa) – Pupanga ‘Chilli Boy’ Tresor is a man on a mission with a lot of heat behind him. In his last appearance in the Hexagon he scored a twelve seconds KO over Tyron Bester, to earn his first win in EFC. Now he will welcome Port Elizabethan local Cameron Pritchard in his debut bout in EFC.

Tresor who entered his last bout in a must win situation having lost his first two bouts came out super aggressively when he faced Tyron Bester in Cape Town at EFC 35. He managed to score a stunning early first round KO. Now he will be looking to continue his new found form at EFC 36 at the Coca-Cola Dome in December.

His opponent Cameron Pritchard has a massive amount of experience in the amateur MMA circuits in the welterweight division. However this will be his EFC debut and how he will fare under the big lights and crowds, is yet to be determined. Known for an exceptional ground game and accurate striking, Pritchard is sure to challenge Tresor in new dimensions.