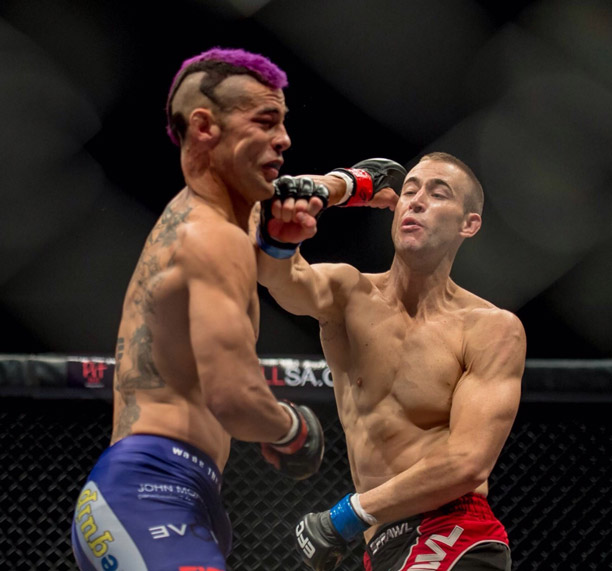 Johannesburg (South Africa) – EFC 36 ended off the year with a bang. In what will be remembered as one of the most exciting cards of the year, a sold out Coca-Cola Dome witnessed an onslaught of submission and KO finishes.

Undefeated featherweight champion Boyd Allen headlined the evening’s fight card in his title defence against the explosive Wade Groth. Allen displayed the skills that have kept him undefeated inside of the Hexagon and continues to show why many regard him as the most well rounded athlete in the EFC. Groth managed to land a big right hand, which prompted the champion to strike back and knock Groth to the ground. It was all over when Allen took Groth’s back and sunk in his hooks to seal victory via rear naked choke.

In the most anticipated fight of EFC 36, Dino ‘The Lion’ Bagattin and Gordon ’Rage’ Roodman squared off in the evening’s co-main event. The verbal exchange between the two had started months prior to the event. The first round was a back and forth battle, with big punches landed by both. Immediately after touching gloves in the second round, Bagattin struck at ‘Rage. Bagattin then scored the takedown, putting him in the position to relentlessly drop elbows on Roodman until the referee stepped in to end the bout.

DRC native Igeu Kabesa put on the performance of his career, displaying an entire new skill set outside of his typical wrestling game. The first two rounds he opted to stand and trade with the former contender Barend ‘BB Gun’ Nienaber. In the third and final round, when Nienaber was attempting to close the distance, he resorted to his base skills of wrestling to control and seal his victory on the ground. Kabesa is now on a four fight win streak and primed to make a run at the lightweight strap.

History was made when former bantamweight champion Nkazimulo ‘Zulu Boy’ Zulu and Francois ‘Franaconda’ Groenewald faced off inside the Hexagon for the first EFC flyweight bout. An all out battle lasting the full three rounds earned them ‘Fight of the Night’ honours. Zulu proved that he is a complete mixed martial artist, with a ground game to match his brilliant striking ability.

In the first fight on the main card, Angolan Marino Cutendana squared off against Oumpie Sebeko in their main card debut. Cutendana’s improvement since moving to CIT was evident, as he matched his opponent in the stand up exchanges and dominated him on the ground to earn him a slick triangle submission victory.

EFC 37: Mynhardt vs. Madge III, Speechly vs. Buirski is presented by BetXchange.com, and takes place at Carnival City, Johannesburg, on Thursday 21 February 2015. Tickets on sale soon at www.computicket.com. Book your cinema ticket to all fights live and in state of the art digital projection at www.sterkinekor.com. Watch the entire event live, from anywhere on the globe, via online streaming at efcworldwide.tv.