DOUBLE D’ IS BACK AGAINST KRUGER 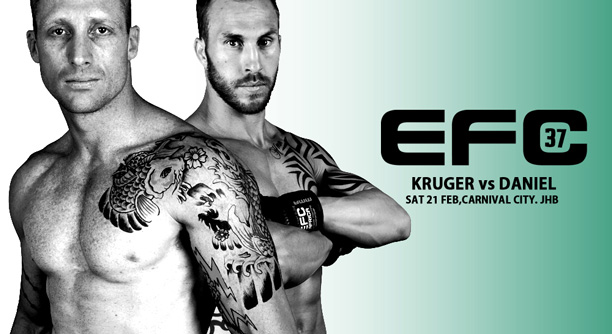 Johannesburg (South Africa) – He is a legend in South African MMA with massive victories over the likes Jacques Joubert and Dallas Jakobi. After nearly two years out of action inside the Hexagon, Darren ‘Double D’ Daniel is back. But the former number one contender JP ‘Tinkerbell’ Kruger is ready to give him the welcome back of a lifetime.

The last time Daniel stepped into the Hexagon, it was for the title against the Jeremy ‘The Pitbull’ Smith at EFC 17. In what started off as a dominant performance from ‘Double D’ he got caught with an onslaught of punches after misjudging a knee and Smith handed him his first loss in the EFC.

Flash forward to present day, the middleweight division has just had its biggest shake up ever, with the current champion Garreth McLellan relinquishing his title to move onto UFC. Now is Daniel’s time to make another run at the title. But before that can happen he needs to face the dangerous JP Kruger.

The former number one contender Kruger was on an undefeated five fight streak until he faced the then champion McLellan. He returned from that loss with a controversial victory over Liam Cleland. With the experience of the title fight and defeating top contender Liam Cleland, Kruger is ready for the new challenge in the legend that is Darren Daniel.