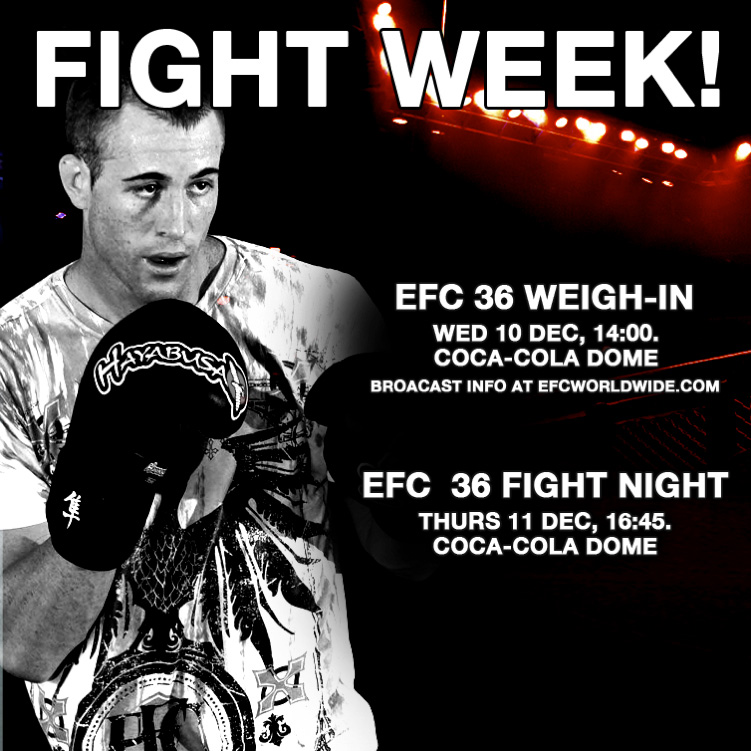 Johannesburg (South Africa) – – It’s Fight Week… Get ready for the final fight night of the year!

A championship battle featuring two of the organisation’s most exciting and dynamic stand-up specialists, and a welterweight clash between bitter rivals top the card at EFC 36.

Get to the Coca-Cola Dome for the ultimate sport entertainment experience, and if you can’t make it there, as a year-end EFC thank you, go to any selected Ster-Kinekor cinema to watch the entire event FREE.

On Thursday we see if the recently crowned featherweight champion Boyd Allen can, for the first time, successfully defend his championship title, or if the new, faster and stronger Wade Groth will cause one of the biggest upsets in EFC history and dethrone the man who seems to have complete control over the division.

Plus a highly charged bout takes place between the former welterweight champion Dino Bagattin and the upcoming tough as nails hype machine, Gordon Roodman. The first ever bantamweight bout ensues as ‘Zuluboy’ takes on ‘Franaconda’, and the undefeated wrestling sensation Igeu Kabesa, who has yet to be pushed to the limit, gets the Hexagon test of a lifetime against former title contender Barend Nienaber.

EFC 36 Weigh-In – Broadcast live, see website for details. Witness the athletes hitting the scales and facing off ahead of fight night. Entrance is free, and as always, huge EFC merchandise giveaways will take place.

Watch the full countdown to Allen vs. Groth:

Watch the full countdown to Bagattin vs. Roodman:

Watch the countdown to Kabesa vs. Nienaber:

EFC 36: Allen vs. Groth is presented by BetXchange.com, and takes place at the GrandWest, Cape Town, on Thursday 6 November 2014. Tickets on sale soon at www.computicket.com. Book your cinema ticket to all fights live and in state of the art digital projection at www.sterkinekor.com. Watch the entire event live, from anywhere on the globe, via online streaming at efcworldwide.tv