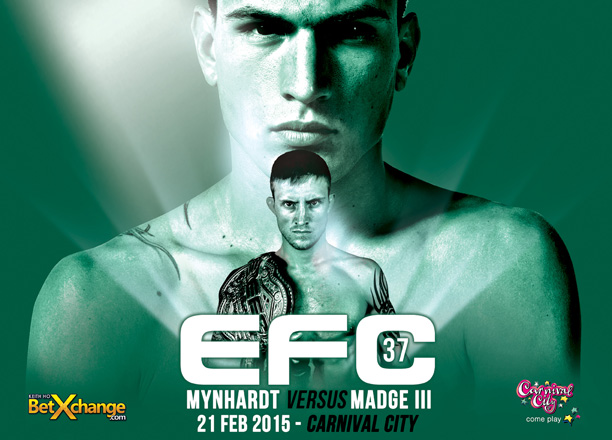 Their first meeting at EFC13, catapulted them both onto the global stage. Mynhardt for his ferocious toughness and Madge for his brilliant striking talents. It is still regarded as one of the most legendary bouts in EFC history, largely in part due to its controversial ending.

Mynhardt was awarded the win, while Madge’s outspoken fans have never forgotten. Their second meeting took place at the same venue, Cape Town’s GrandWest Grand Arena, this time with Madge the reigning lightweight champion. After his ground demolition of Costa Ioannou, all expected him to dominate Mynhardt – then thought of as having a week ground game. Mynhardt entered the bout a new and improved all round athlete, resisting every submission attempt.

The fight went the distance in what was seen as the closest fight in EFC history without a draw. Mynhardt was announced the victor again, this time via split decision. The local crowd was left in shocked awe. He left Cape Town with the belt. Once again Madge and his fans were left on the wrong side of a decision that could have gone either way.

They have been scheduled to meet twice since that fateful night in Cape Town. But due to injuries, once from each party, the third meeting has been postponed till now.

Mynhardt has been a proverbial thorn in Madge’s side throughout his career in EFC. They are arch rivals. For their third encounter they will face each other in Johannesburg, the first time they meet in Mynhardt’s backyard. In a rivalry that has already etched its way into the history books, perhaps fate will line up in Madge’s favour.