THE ANSWER FOR THE PROFESSOR 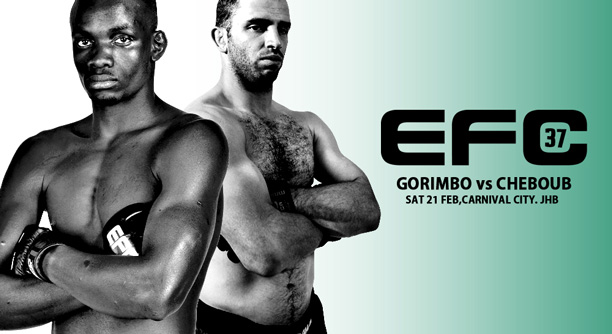 Johannesburg (South Africa) – Themba ‘The Answer’ Gorimbo has been on a tear in the lightweight division having gone three straight wins inside the Hexagon. Gorimbo has been sidelined due to injury since his victory in February, and now is his return. Nearly a year later he will face Alex ‘The Professor’ Cheboub as the first bout on the main card for EFC 37.

Gorimbo has put on three phenomenal performances against super tough opponents. Finishing his first two bouts in the Hexagon via armbars, both in the first round, he then faced Chaz Wasserman. In his hardest bout to date, he rose to the occasion and came from behind to win via a slick D’arce choke in the second round.

“His next challenge comes in the form of EFC veteran Alex Cheboub. A victory here would surely put him into the mix as a potential contender for the lightweight belt.

Cheboub has been through it all, having lost a title fight to Costa Ioannou followed by a loss to Leon Mynhardt. Then he went on a three fight win streak only to have it dashed by number one contender Wade Groth via a spectacular KO. Always a fight of the night prospect, Cheboub needs to get back into the winning column.