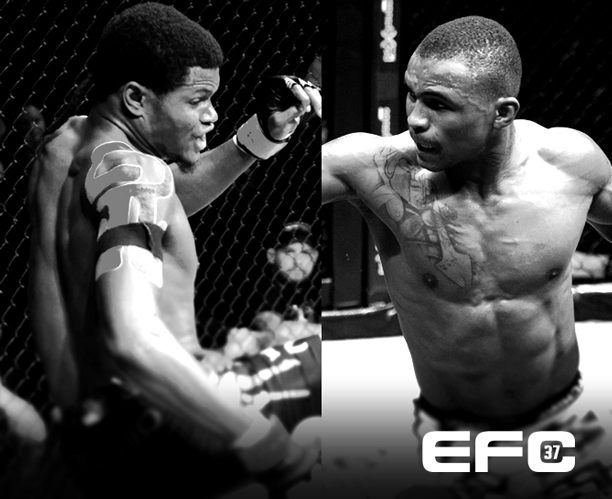 Johannesburg (South Africa) – DRC native Alain ‘Commanda Boy’ Ilunga had been in a rut, having gone on a four fight losing streak. He then changed camps and at EFC 36 we saw his return to form. He took a victory via triangle choke in the second round. Now he faces the dangerous striking of Sydney ‘Machine Gun’ Mokgolo.

Similarly Mokgolo was on a four fight losing streak until his last outing to the Hexagon in Cape Town at EFC 35, where he faced renowned grappler and EFC veteran Chad Hepburn. Mokgolo went through the gritty bout, displaying his resilience and improved ground game to take a split decision victory.

Ilunga was once at the top of the featherweight division, until he suffered a loss to then champion Demarte Pena . From there, everything seemed to fall apart for him as he racked up another three losses. At EFC 36, he put in a phenomenal performance, displaying his brilliant striking and vastly improved submission game to take the win.

Both athletes are looking for a second win in a row and build on their momentum. They are renowned for their incredibly fast and accurate striking with similar styles. Can we expect the technical striking war between these two kickboxers?