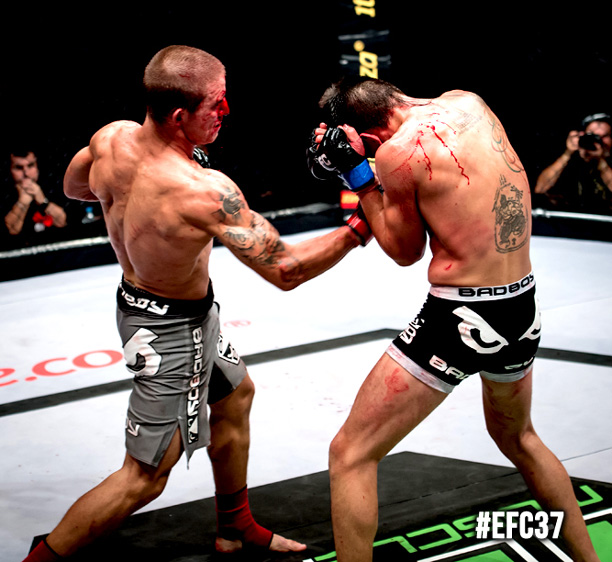 Johannesburg (South Africa) – Leon ‘Iron Lion’ Mynhardt has been stalwart of MMA since its inception in South Africa. After many years of working hard and refining his craft, he finally claimed the highly coveted EFC lightweight title belt in what some claim to be a controversial decision. At EFC 37, he will have the chance to finally put the controversy behind him when he faces Don ‘Magic Man’ Madge for the third time.

Since the controversial victory over Madge in Cape Town, Mynhardt has gone on to successfully defend his title twice. First with a devastating Knock out of Frederich Naumann and then a dominant performance and submission victory over Sibusisu Mdoko. Now in his third defence he faces his biggest adversary for the third time.

“My training never stops and I train each and every day to become better, stronger and faster,” stated the champion in an interview this morning. In preparation for my next fight I am working on developing new skills with the help of my coaches and team mates.”

“Fans can expect to see me doing what I love most,” explained Mynhardt. “Bringing the fight and leaving everything inside the cage,” he concluded.

“I don’t care what anyone says, this sport is about fighting and not talking,” stated Mynhardt. “I won both fights, and the only reason why there are controversies, is because some people underestimated me and didn’t expect me to win. This time I will be focusing on finishing the fight before the judges get a word in.”