‘HERCULEEZ’ READY TO TAKE ON THE DIVISION 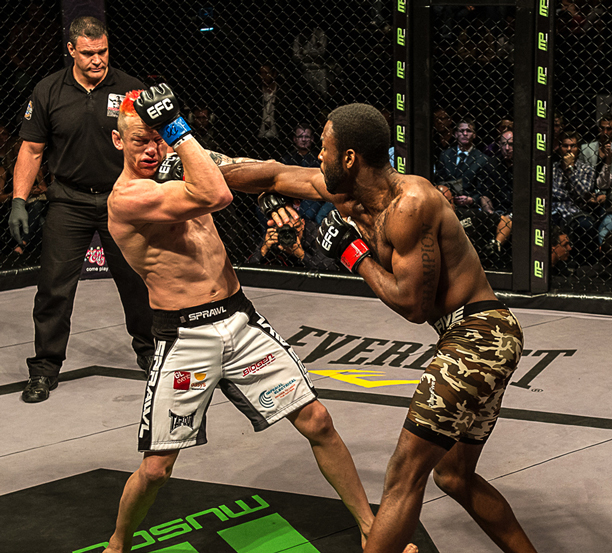 Johannesburg (South Africa) – Henry ‘Herculeez’ Fadipe entered EFC and immediately mad a strong impression on fans with his debut against Tumelo Maphuta, going to a draw. He then went on a two fight win streak, beating Martin van Staden and Michiel Opperman earning him a shot at the welterweight title.

He then managed to dispatch the then champion Dino Bagattin with a KO in the first round to be crowned the king of the division. However, his reign was short lived when he lost a 5 round decision to Adam Speechly. Following his first loss in EFC, Fadipe took some time off for self-reflection and personal time. He has since moved gyms and begun his training again, along-side EFC welterweight Peter Queally.

Fadipe took some time out of his busy schedule in order to discuss what he has been up to and give us his thoughts on his new team mate and training facilities.

You have been fairly quiet on social media since losing the title to Adam Speechly. Is there any reason for this? There was a lot going on in my personal life just before the fight with Adam. After the fight I needed to take a break from everything MMA related and sort some stuff out.

You have recently changed camps and moved to SBG alongside EFC athlete Peter Queally and many other famous MMA athletes. What sparked this move? I parted ways with Ryoshin after a 5 year relationship with the gym. After that there were only 2 other gyms I felt had the facilities and stable of fighters to get me where I need to be. Those being either Team Ryano where my former training partner Ayo Daly now trains out of, a former rival opponent turned friend of mine John Redmond and also UFC fighter Neil Seery and recently signed Paul Redmond. Or the very well-known and established SBG. After a couple of sessions training with the likes of UFCs Cathal Pendred and BAMMAs Chris Fields I felt that was a good fit for me. A place with the biggest sharks, that are after the same prey as me.

How have you been adjusting to the new camp and training partners? I’m finding it very weird. I still feel like an outsider but as this is my first time ever changing camp I’m sure it is expected. The guys are awesome and friendly and I feel it is somewhere I can start fresh.

Your new team mate Peter Queally will be facing an old opponent of yours in Martin van Staden at EFC 38 in Durban. They will be fighting for the number one contender spot, for the right to challenge for the title. How does this make you feel? I haven’t really thought too much into that, it is something we will obviously have to discuss very soon. But for now I just want to focus on bettering myself, as an athlete, and SBG has the partners to help me with that.

How do you think Queally will do against Martin van Staden? I had a quick roll with Peter my first training session after a 4 month layoff and he made me feel like a first timer. He definitely knows his shit and very good at it. A lot stronger than he looks and unless Van Staden brings his ‘A game’, he might find himself a victim of yet another Irish beat down.

When can we expect to see you in the Hexagon again? I’m only back in training now so I’m not looking to rush into anything too fast. Although, I would love to fight as soon as possible. So As soon as Graeme gets off his ass and finds me a victim I will be able to evaluate and take things from there.

Could we ever expect to see you and Queally, two Irishmen, face each other in the Hexagon? Anything could happen. Like I’ve said before nothing is written in stone yet. I’m still sort of one leg in one leg out of the gym until we have discussed the issue of MY belt being on everyone’s wish list.

But at the same time I have to think of the bigger picture. Regardless, SBG is the best gym around here and in the long run will be of benefit to me.