Wessels vs. Drotschie II, 07 May 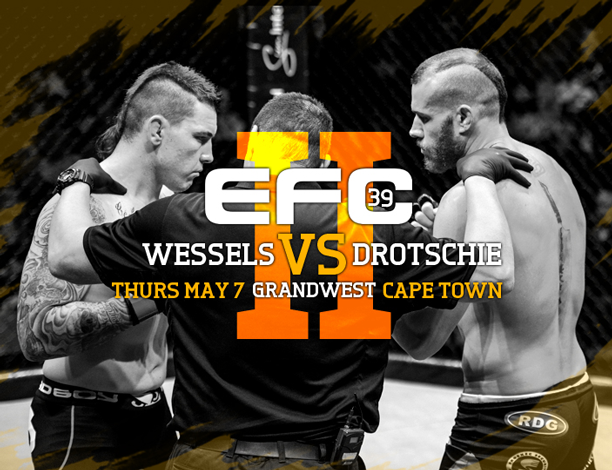 Johannesburg (South Africa) – They met for the first time at EFC 35 in Cape Town. In what was a bloody battle that ended in the third stanza, the referee called an end to the dramatic bout and a new champion was crowned. It was later discovered that Gideon ‘Juggernaut’ Drotschie’s forehead had been cut on the padded post. Now he will have his opportunity to avenge his loss and face Norman ‘Chef’ Wessels in Cape Town again at EFC 39.

Drotschie is coming into this bout more eager and motivated than ever before. He wants what he believes to be his and was wrongfully taken from him. “I might have been down on points the first two rounds, but I know I could have made a comeback. One punch can change a fight. It should have been called a no-contest,” stated the former champion Drotschie. “I understand the referee’s decision, but I deserve my chance at redemption since I was robbed of a proper title defense. Norman I want what is mine!”

The bad blood runs deep in what is the most anticipated rematch in EFC history. Wessels, a former EFC heavyweight champion and now the light heavyweight champion, has travelled a long and hard journey to get to this point, having come so very close in previous occasions. His first attempt at the light heavyweight title was against JP Joubert, of which he was dominating until Joubert landed a combination of heavy hands and won by TKO in the third round. Wessels then went on to beat Chris du Pont in a dominant fashion with a rear naked choke, early in the first round to earn himself another shot at the title, this time against Drotschie. He then did what no other had yet, and handed Drotschie his first loss of his professional career.

This victory was marred by Drotschie’s forehead receiving a cut, not from Wessels. Eventually the referee called an end to the bout due to too much blood loss. The referee’s decision is final and the loss stood, but it was decided that Drotschie should have the right to battle for the belt again.

Now is Drotschie’s chance at redemption, but Wessels is ready to hold onto his title at all costs.

EFC 39: Groenewald vs. van Zyl, Wessels vs. Drotschie II is presented by BetXchange.com, and takes place at GrandWest, Cape Town, on Thursday 7 May 2015. Tickets on sale soon at www.computicket.com. Book your cinema ticket to all fights live and in state of the art digital projection at www.sterkinekor.com. Watch the entire event live, from anywhere on the globe, via online streaming at efcworldwide.tv