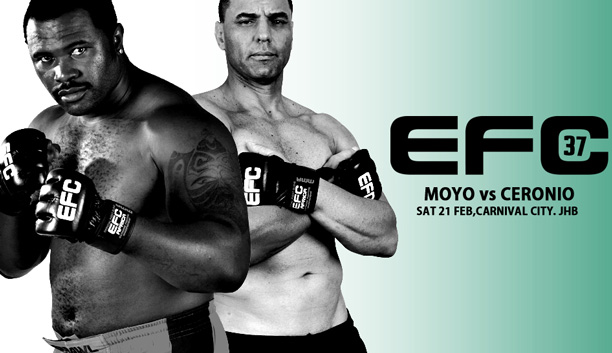 Johannesburg (South Africa) – Elvis ‘The Bomber’ Moyo is notorious for the power he generates when he unleashes his hands and has aptly earned him the name ‘The Bomber’. At EFC 37, he will look to continue his two fight win streak when he faces the formidable Lance ‘Hulk Smash’ Ceronio.

Moyo has had a turbulent time in EFC. He initially debuted with an impressive win over former contender Sors Grobbelaar. His weakness on the ground was then exposed and he suffered back to back losses to the current heavyweight champion and number one contender Brendon Groenewald and Andrew ‘One Gear’ van Zyl respectively. Having gone back to the drawing board and worked on his take down defence and grappling game, he has since won his most recent two fights impressively.

His opponent, similarly has had an up and down history in EFC. An EFC veteran from EFC 2, Lance Ceronio has shown that he can be dangerous from almost any position and is able to finish a fight standing or on the ground. In his last outing in the Hexagon at EFC 21, he went toe to toe with Wilhelm Strauss for three exhilarating rounds, which earned them ‘Fight of the Night’ honours.

Both Moyo and Ceronio have extensive boxing backgrounds with heavy hands, but who has evolved the most?