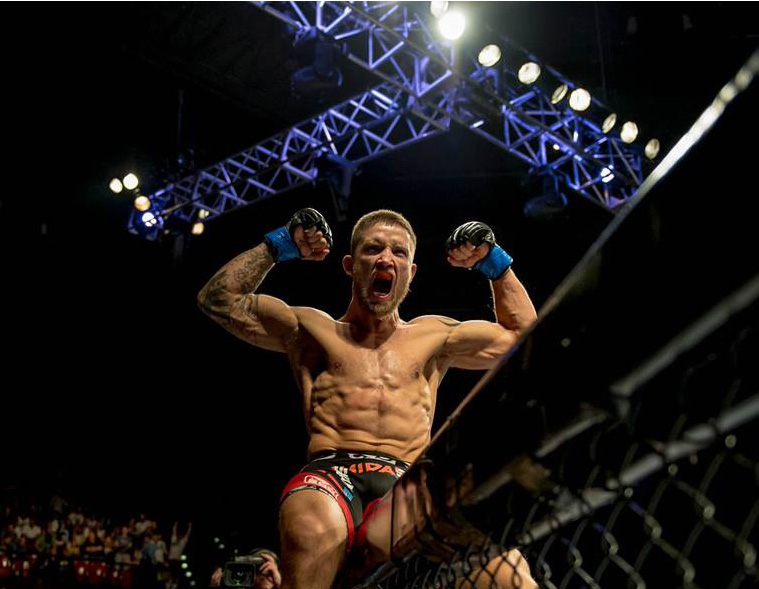 Johannesburg (South Africa) – In what is set to be another trail blazing year for the organization, EFC kicked off 2015 with an electrifying night of action. In what will be remembered as one of the most hyped cards of in recent memory, a sold out Carnival City bore witness to history.

Leon Mynhardt put an end to EFC’s longest running rivalry by disposing of Don Madge by way of a guillotine in the first round of their lightweight title fight. Mynhardt has now retained his belt on three successive occasions, and has firmly stamped his authority on the lightweight division.

The highly anticipated welterweight title fight between Adam Speechly and David Buirski co-headlined the event. Speechly, a two time champion in the welterweight division, was determined to be the one to finally end the infamous welterweight curse and retain his title. It was not to be, as Buirski executed a perfect game plan and nullified all of Speechly’s advances. Eventually cornering the champion against the fence, Buirski scored a stunning TKO to become the new welterweight champion.

EFC 37 also saw the return of South African MMA legend Darren Daniel to the Hexagon. He faced the youthful exuberance of Dricus du Plessis in a short but action filled battle. Daniel started well, despite an early guillotine scare in the round, took control of the early exchanges until the latter parts of the first round. Du Plessis had other plans though, and after a masterful sweep from the bottom, managed to sink in a rear naked choke that left Daniel with no option but to tap.

In a three round war of attrition, Matt Buirski displayed his improved wrestling and experience to dominate the confident Tumisang Madiba in the first two rounds. Madiba, coming into the fight on a three fight win streak, attempted a late game come back which proved too little too late. Buirski was awarded the win via unanimous judges decision.

In the opening bout on the main card, lightweight prospect Themba Gorimbo took on EFC stalwart Alex Cheboub. Gorimbo came out aggressively from the onset, while Cheboub seemed sluggish and out of sorts. Gorimbo earned himself a slick guillotine submission early in the first round taking his professional MMA record to 5-0, with a shot at Mynhardt surely not far away now.

On the prelimanry card, fans saw history being made as Hungarian Zita Varju and South African Danella Eliasov opened the EFC women’s flyweight division. Varju came out aggressive and stunned Eliasov with a few shots. However, Eliasov quickly reverted to her background in Brazilian Jiu Jitsu and took Varju to the ground. Eliasov ground her way into a mounted position where she attempted an arm bar but was unable to get the submission. Using her dominant position, Eliasov managed a flurry of hammer fists on the Hungarian, forcing the referee to call a stop and award the South African a TKO victory