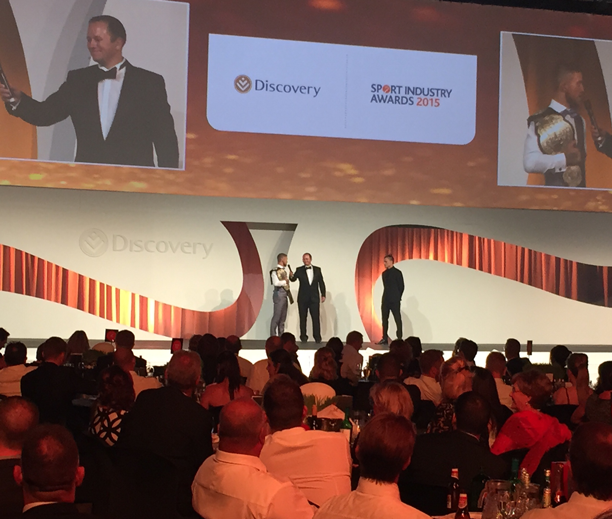 Johannesburg (South Africa) – The sport of mixed martial arts (MMA) has once again proved its massive appeal as last night EFC clinched the coveted Sport Brand of the Year award, for the second year running, at the 2015 Discovery Sport Industry Awards.

EFC were nominated for a further two categories, Best Live Experience and Best use of Digital Communications, making the organisation one of the most nominated of any sporting brand. 2015 is also the fourth year running that EFC has been nominated, and is the only brand to have won this award more than once.

“It is an incredible achievement,” said EFC president Cairo Howarth. “This award shows the massive growth of EFC and the mainstream appeal of the sport of MMA. 2015 is going to be our best year yet!”

EFC lightweight champion Leon ‘Iron Lion’ Mynhardt and contender Don ‘Magic Man’ Madge took center stage at the award ceremony when they met face-to-face on stage ahead of their EFC 37 trilogy title fight. The next time these two rivals meet will be at EFC 37 weigh-in on Friday 20 February.

The coming year promises to be even better for EFC with BetXchange.com as the title partner, plus AquaVita Water and AG Mobile recently joining the ranks as official partners along with GNC supplements, Pit Bull Energy Drink, Rex Diff and Gearbox, OnePlan Health Insurance, Sun International and Maxim Magazine.