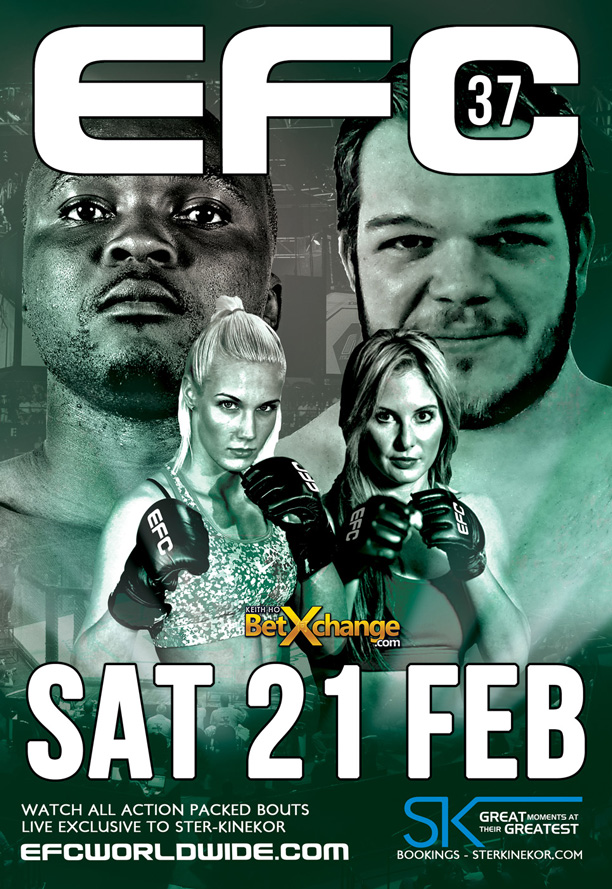 Johannesburg (South Africa) – On 21 February we see two heavyweights go to war and the historic launch of the EFC Women’s division. For the first time fans will get to witness a double headline in cinemas. This is the main event of the EFC 37 Ster-Kinekor Prelims… This is Ricky ‘Apocolypse’ Misholas versus Cyril ‘Silver Back’ Asker and Zita Varju versus Danella Eliasov.

Known for his one punch KO ability, DRC native Ricky Misholas is always a threat to any opponent in the heavyweight division. Having had an unfortunate run in EFC of late, Misholas is looking to change his current career trajectory around using his notorious punching power to get the win.

However he will stand opposite French sensation Cyril Asker. This will be Asker’s EFC debut and he is coming to make a statement in the division. While Ricky is looking to power his way back into the winning column, Asker wants to continue his current two-fight win streak and show off his well-rounded skill set.

Added to this will be history in the making, when the inaugural EFC women’s flyweight bout takes place between South Africa’s own Danella Eliasov and Hungary’s Zita Varju.

The Hungarian is coming in aggressive and hunting for a dominant win, she is known for her history in kickboxing finishing ability. Whereas this will be Eliasov’s professional debut and is an incalculable entity except for her dangerous submissions. Does the South African have what it takes to fend off and overcome the Hungarian threat?

Watch it live ONLY at Ster-Kinekor cinemas. This plus 5 more explosive Ster-Kinekor Prelim Bouts, plus all the action from the 5 main card bouts in the larger than life MMA experience. Get your ultimate front row seat to the action, in cinemas across South Africa.