‘STILLKNOCKS’ BACK BETTER THAN EVER

Du Plessis vows he will be victorious at EFC 37 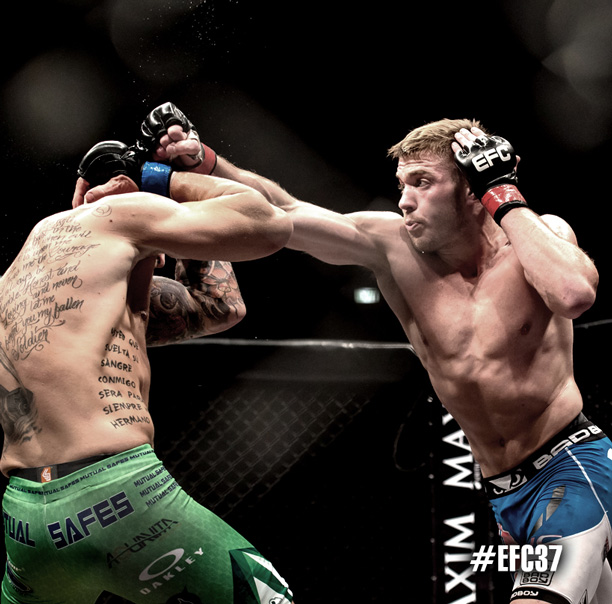 Johannesburg (South Africa) – JP ‘Tinkerbell’ Kruger was all ready to welcome Darren ‘Double D’ Daniel back to the Hexagon, when he suffered an injury that forced him to withdraw. After an outpour of requests, former number one contender Dricus ‘Stillknocks’ du Plessis stepped up as a replacement.

Du Plessis’ last outing in the Hexagon was for the middleweight belt against the Garreth McLellan. In what was an even exchange, du Plessis showed his inexperience in comparison to the champion and lost via a rear naked choke in the third round. Now he will face his former adversary’s training partner.

“Garreth was a good learning curve, I wish him all the best in the UFC,” reminiscing on his last bout. “I respect DD tremendously as a person and as a friend. However, in the cage he is just another object in my way and I will do what I have to, to move through him.”

“I took the fight on short notice,” du Plessis stated on the upcoming bout. “Our team always train together so my team mates and I are always ready to fight. Preparation is standard procedure.”

Du Plessis was in the process of dropping down to welterweight, when the opportunity arose and he opted to stay at middleweight for Daniel. “My decision is final, Welterweight is where I will fight,” explained du Plessis. “EFC asked my coach if I will fight DD at Middleweight and we immediately took the fight. I love to fight and I would rather fight a strong guy like DD than sit out for 1 or 2 months. We train hard to test ourselves all the time,” he continued. “My ambition for now is to beat Darren,” added du Plessis. “Then I’ll work to get a contender shot in the welterweight division and get the gold.”

“I am in a very happy space, I have no injuries and I just love what I am doing,” he stated. “I have never felt this good about my fighting. I am very blessed with great health, fitness, a great coach and team behind me and support in all forms from sponsors and fans. ‘Stillknocks’ is back better than ever!”