THE PROFESSOR HAS DONE HIS RESEARCH 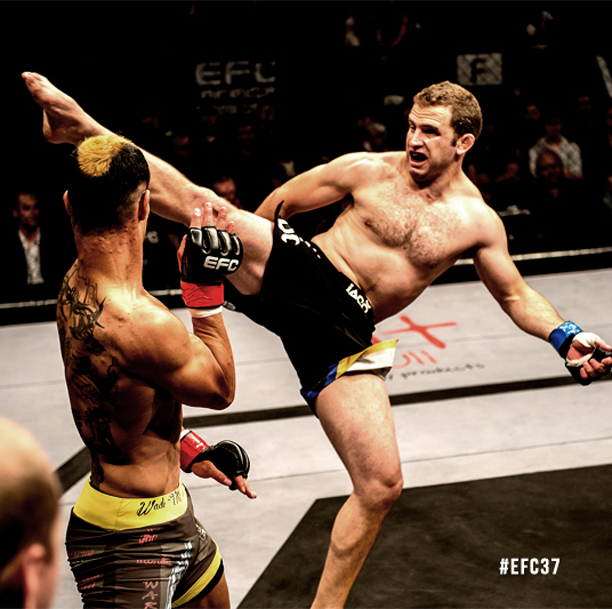 Johannesburg (South Africa) – Alex ‘The Professor’ Cheboub has been a consistent competitor in EFC, having first entered the Hexagon at EFC 03. He come close to EFC gold, when he met and lost to Costa Iaonnou in the third round. Known for his unorthodox and wild striking style, he can be wily on the canvas in the scramble.

In his last outing to the Hexagon he went into the bout against Wade Groth riding a three fight win streak and looked like he was working his way back into title contention. Groth rocked the boat when he scored a brutal KO in the second round on Cheboub.

“Wade is a clever guy and a good strategist.” Cheboub reflected on his last bout. “I had fitness issues coming into the fight but Wade’s chin has proven suspect in the past and I felt I could weather his attacks until the opportunity presented itself for a KO. Well he out manoeuvred me, stayed out of my striking distance and tired me out before capitalising on an opening himself. He played it perfectly and I underestimated him,” he concluded.

“All things considered I am having a good camp,” stated Cheboub. “I have focused on remedying my weaknesses. I’m hoping to showcase some new skills, have a better weight cut and exhibit better conditioning.”

“My opponent is very well rounded.” said Cheboub. “I would rather be discrete and say I plan to target his weaknesses while avoiding his strengths. Themba is one of my favourite athletes. He is a cool, honest and humble guy. I think we will have a great fight come fight night.”