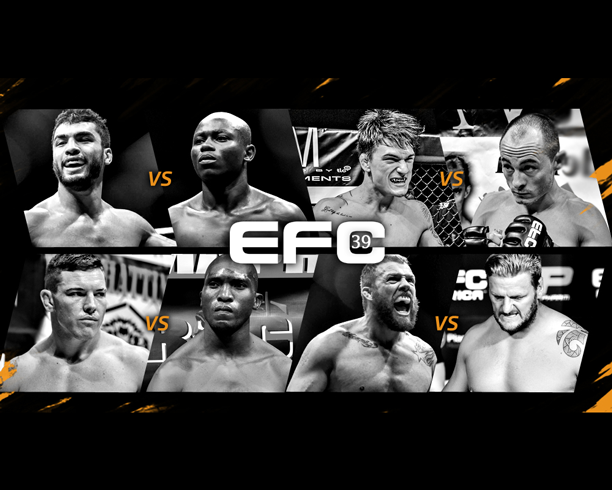 Johannesburg (South Africa) – EFC 39 headlined by the heavyweights. Andrew ‘One Gear’ van Zyl challenges the reigning champion Brendon Groenewald in his first title defence. Cape Town is in for a night of epic proportions on 07 May.

Many believe that van Zyl is the true heavyweight champion, his only losses coming by former Champion Ruan Potts. Now he has the chance to reclaim the title. This will be Groenewald’s first defence since he claimed the title by viciously knocking-out Christophe Walravens. Groenewald will stop at nothing to retain the gold strap, and prove he is the rightful champion.

The co-main event of the evening features the number one contender light heavyweight bout between former champion Gideon ‘Juggernaut’ Drotschie and the heavy handed Tumelo ‘The Truck’ Maphuta. Both athletes had been promised a title shot, and both put everything on the line when accepting this title fight eliminator bout. Now with everything hanging in the balance, who will rise to the occasion when they clash in May?

Plus the dangerous bantamweight Irshaad ‘White Tiger’ Sayed, delays the inevitable highly anticipated title fight with Demarte Pena to compete in hos home town and face the top of the flyweight division in Nkazimulo ‘Zuluboy’ Zulu. Two phenomenal strikers that have proven submission skills meet at catchweight in what could be the one of the biggest unexpected bouts in EFC history.

One is the former champion and the other is a former number one contender. Don ‘Magic Man’ Madge will welcome Frederich ‘Ninja’ Naumann back to the Hexagon in front of his home town crowd. Both athletes have proven they are capable of finishing a fight from any position and will look to do so when they meet in Grand West.

The last event at Grand West was sold-out to a boisterous capacity crowd and this event is expected to do to the same. EFC 39 tickets are on sale now and are available here: efcww.com/1xaRLoE