EFC 39 CARD IS LIGHTING UP 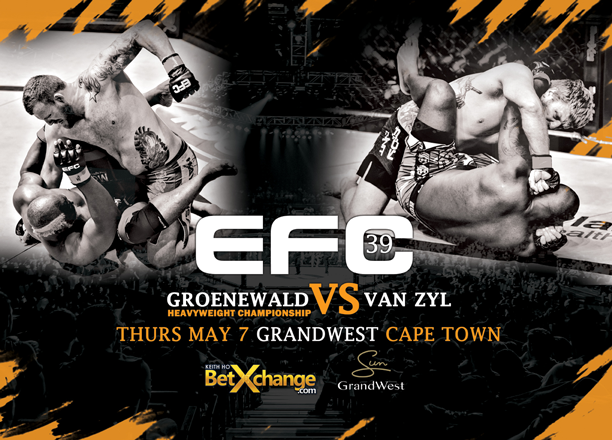 Johannesburg (South Africa) – With EFC 38 in Durban only a month away, the EFC 39 card in May is already massive and growing. Headlined by the heavyweight title fight between recently crowned Brendon Groenewald and Andrew ‘One Gear’ van Zyl, and featuring light heavyweights Gideon ‘Juggernaut’ Drotschie vs. Tumelo ‘The Truck’ Maphutha as they battle it out for the number one contender spot.

Brendon Groenewald won the vacant heavyweight title in October 2014 when he shocked the world with his KO of odds favourite Christophe Walravens. The newly crowned champion was known for his sublime grappling and submission skills, until he threw the vicious combination that knocked out his opponent and awarded him the belt. His opponent is considered by many the rightful heavyweight champion. Having only lost to one man before, he has steamrolled his way through the division since losing the title and earned his right to fight for the title again.

Featuring on the main card will see Cape Town’s ‘Juggernaught’ Gideon Drotschie take on Tumelo Maphuta for the coveted number one contender bout. Drotschie is coming off his first ever loss, having lost his title belt last year. Maphuta has dominated his last two opponents with his notorious punching power. These two have everything on the line when they meet in the Hexagon with a title shot hanging in the balance.

These two and ten more high profile bouts still to be announced at EFC 39 in Grand West, Cape Town on 07 May 2015.

EFC 39: Groenewald vs. van Zyl is presented by BetXchange.com, and takes place at GrandWest, Cape Town, on Thursday 7 May 2015. Tickets on sale soon at www.computicket.com.