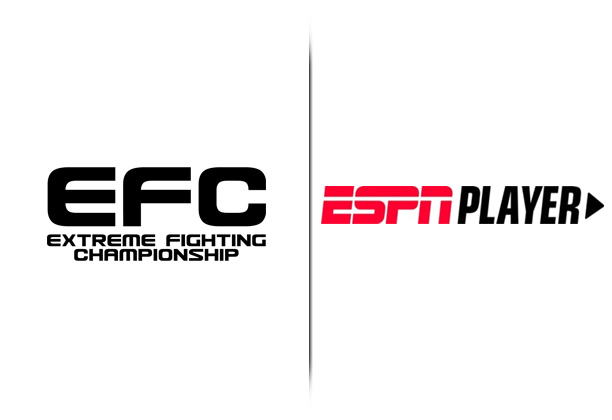 London, UK – ESPN and EFC have concluded a deal which will provide fight fans across Europe live coverage from one of the world’s leading Mixed Martial Arts (MMA) organisations. EFC, the Extreme Fighting Championship, showcases some of the best fighters from across the globe competing in action-packed bouts to determine the ultimate champions, and now European sports fans can catch all the action from the next three EFC events in a special 3-event promotion, live and in HD, on ESPN Player.

As a new channel on ESPN’s live streaming service, ESPN Player will feature EFC 38, EFC 39 and EFC 40 bradcast live and exclusively in the UK, Ireland, Italy, Germany, Austria, Switzerland, Czech Republic, Slovakia and Hungary. European fight fans will be able to watch the 5 main card bouts from each event in a special 3 hour live broadcast, as well as watching it after the event through ESPN Player’s On-Demand service.

Charly Classen, Vice President, ESPN EMEA, said: “We are delighted to bring fans across Europe one of leading franchises from one of the fastest-growing sports in the world. EFC is a great addition to the ever-growing portfolio of content on our live streaming service – fight fanatics can watch the best action from the next three events live on ESPN Player.”

EFC President, Cairo Howarth, added: “EFC is renowned for exciting bouts and high production quality, and European fans can look forward to watching on a world-class platform with ESPN Player. We are excited to offer European EFC fans a high quality live broadcast of events, as well as reach a new fan base through ESPN Europe’s network.”

At EFC 38 on 4 April in Durban, Irish welterweight Peter ‘The Showstopper’ Queally will meet hometown favourite Martin ‘The Punisher’ van Staden, in what promises to be an explosive battle. Queally is a technical grappler with fluid movement and has jumped up the rankings into this number 1 contendership bout against the power-punching South African, van Staden. The main event will see the EFC featherweight title be put on the line as reigning champion Boyd Allen takes on the dangerous Wesley Hawkey in this highly anticipated re-match. Plus watch the Durban native Keron ‘Skinner’ Davies take on Poland’s Rafal Haratyk in the opening bout of the main card. See the full fight schedule for EFC 38 here.

ESPN Player’s coverage of the events includes all main card fights (the events are usually around 3 hours in duration). Packages include an EFC Event Pass and an EFC Triple Event Pass, starting from €7.99. For all pricing and other information visit ESPNPlayer.com.

About ESPN Player ESPN Player, ESPN’s broadband platform in Europe, provides sports fans with live and on-demand sports action from the US and Europe online. It joins ESPN’s growing digital portfolio in Europe, the Middle East and Africa, which includes the online and mobile websites ESPNcricinfo.com, ESPNFC, and the UK-focused sports portal ESPN.co.uk.

ESPN Player features more than 3,000 live events and thousands of hours of live and on-demand sport, including but not limited to:
• US College Football: Hundreds of games from the university gridiron of the US, including regular season, Bowl Games and College Football Playoff;
• US College Basketball: Hundreds of games from the hard courts of the USA’s top universities, including the regular season, Championship Week and March Madness
• US College Lacrosse, Baseball, Softball, Ice Hockey, Soccer, Volleyball and more
• X Games
Now featuring the following new channels:
• Verizon IndyCar Series
• EFC – Extreme Fighting Championship
• BAMMA (British Association of Mixed Martial Arts)