Welterweight title on the line, May 01 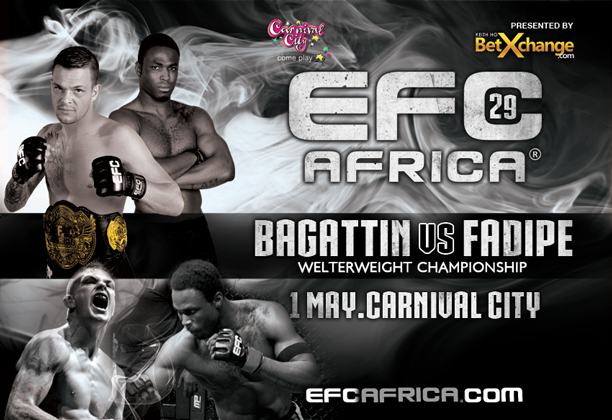 Johannesburg (South Africa) – At EFC AFRICA 29 striking sensation Dino `The Lion` Bagattin defends his welterweight strap against the Irishman from Nigeria, Henry `Herculeez` Fadipe, in his greatest battle yet. In addition tough customer Brendon Katz takes on the as yet unstoppable Barend Nienaber for the coveted featherweight number one contender spot.

Welterweight champion Dino Bagattin (11-3) is a veteran of the EFC AFRICA organisation. In September of 2013 he faced former champion Michiel Opperman for his title, and took it from him in a brutal, decision encounter that was later named fight of the year.

Nigerian born, Ireland based Fadipe (7-6-1) entered the EFC AFRICA Hexagon in April of 2013. He immediately impressed by battling the notorious Tumelo Maphutha to a split draw, and after scored sensational wins against Martin van Staden and former champion Michiel Opperman.

Both men are known for their uncompromising, aggressive style. With a Twitter feud already playing out, the meeting between these two is personal and doubly deep with the title of Africa’s greatest welterweight on the line. Will Bagattin’s speed be Fadipe’s undoing, or will the power and unpredictability of the challenger prove too much for the champion?

Katz (6-2) is a well-known EFC AFRICA figure. After debuting in his unforgettable encounter with Costa Ioannou, and thereafter defeating Mark Jones at EFC AFRICA 04, he left African shores to fight internationally. He returned to face Gareth Buirski in September last year, and extended his form and win streak to secure a number one contender shot.

With a pro MMA record of 2-0, but riding an eight fight win streak including his amateur career, Nienaber brings smooth skill and burning hunger to this top contender encounter. Will his youth be the undoing of the more experienced Katz?

EFC AFRICA 29, presented by BetXchange.com, takes place on Thursday 01 May 2014 at the Carnival City Big Top Arena, Johannesburg. Tickets on sale now at www.computicket.com. Book your cinema ticket to all 11 fights live and in stunning HD at www.sterkinekor.com. Watch the entire event live, from anywhere on the globe, via online streaming at efcafrica.tv.