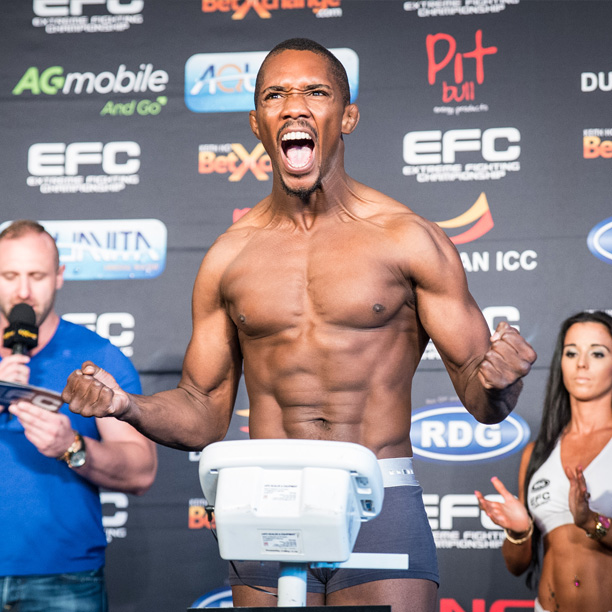 Durban, South Africa – The official weigh-in for EFC 38 took place in front of a capacity crowd in the Durban ICC this afternoon. The room was filled with Durban’s biggest MMA fans showing support for their home town heroes as they stepped onto the scale.

The featherweight title fight between the dominant champion Boyd Allen and the dynamic Wesley ‘Young Assassin’ Hawkey headlines Saturday’s event. This will be the second time that the two meet in the Hexagon, but this time the stakes are much higher. The crowd cheered their local hero Hawkey as the two faced-off for the last time before they clash tomorrow night.

“Come and make a noise,” stated the challenger Hawkey. “At the end of that fight I will have the belt!”

Featuring on the main card, Martin ‘The Punisher’ van Staden takes on Irishman Ayo Daly. Daly trains alongside Henry Fadipe, who was the last man to defeat van Staden. With a title shot on the line van Staden has everything to lose in this bout. Daly has everything to gain as he makes his EFC debut.

Also on the main card is the highly anticipated lightweight matchup between the unbeaten Igeu ‘Smiley’ Kabesa and Durban favourite Saxon ‘One Minute Monster’ Delafield. Delafield has claimed he is unbeatable in his home town and Kabesa has claimed he cannot lose, ever. Whose theory will be disproved on Saturday?

Durban’s Tyson Chelin looks for his fourth victory in a row when he meets wrestling and knockout artist Hanru Botha on Saturday. In what has been described as a battle of technique and brute power, fans cheered local athlete Chelin when the two faced-off.

The main card will be opened by Poland’s Rafal Haratyk and Durban’s Keron ‘Skinner’ Davies. Both athletes made weight comfortably. Davies stepped onto the scale eating a burger and Haratyk offered his opponent a chocolate bar. Haratyk later stated “I have a whole fist of candies, but I will leave them for tomorrow.”

In addition to a stacked main card, EFC will host its second professional women’s bout between South African Amanda Lino and Irish Stephanie Quaile. Both women looked in menacing shape as they faced-off.

Five athletes initially failed to make weight with Jasen van Der Merwe, Baldwin Madlose, Ashley Calvert, Nelson Feiteira and Saxon Delafield over the required category. All athletes subsequently opted for a purse deduction, which was agreed upon with their opposition.

EFC 38 weigh-in results were as follows: