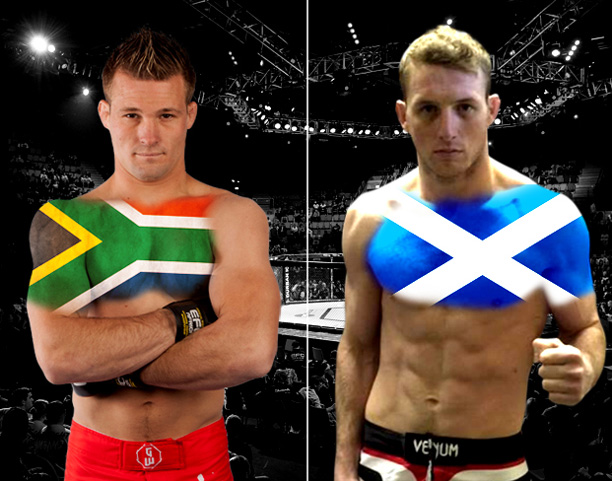 Johannesburg, South Africa – One bout has been left unannounced on the main card for the milestone 40th event next month. New Scottish signing, Daniel Henry, will make his EFC featherweight debut against South Africa’s renowned wrestler and KO specialist, Hanru Botha. Both athletes are known finishers, the opening bout of the main card is sure to bring non-stop high paced action.

Botha is running a two fight win streak including one of the biggest knockouts of 2014. Having showed consistent improvements in every bout, opponents are wary of his one punch KO ability, not to mention his significant wrestling prowess. Botha is on the hunt for redemption against his first ever loss against Boyd Allen he suffered in his EFC debut. To get there, he will have to get through his biggest challenge yet in the form of Daniel Henry.

The Scotsman enters EFC with a professional mixed martial arts record of four wins and one loss, and with all of his victories coming from early finishes. Having an even spread of TKO and submission victories; he is known as very well round mixed martial artist. A former champion at lightweight in a local Scottish promotion, Henry is now competing at featherweight to further his accomplishments and become a major contender in EFC. Henry stated, “I’m looking forward to testing myself against the best that EFC has to offer…”

In a division full of evolving talents, Henry is sure to stir-up the competition and provide exciting bouts with whomever he faces, especially against the dominant redemption seeking Botha.

EFC 40: Bagattin vs. du Plessis, presented by BetXchange.com, and takes place at Carnival City, Johannesburg, on Saturday 6 June 2015. Tickets on sale soon at www.computicket.com. Book your cinema ticket to all fights live and in state of the art digital projection at www.sterkinekor.com.