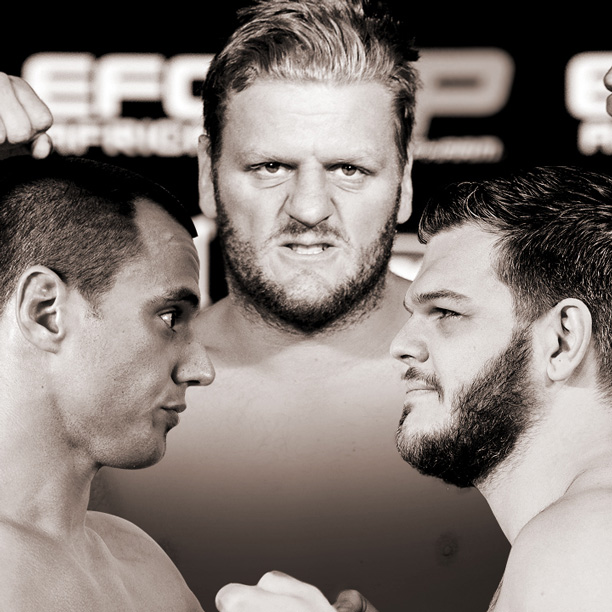 Johannesburg, South Africa – Andrew ‘One Gear’ van Zyl reclaimed the heavyweight title in spectacular fashion when he knocked out Brendon Groenewald in just thirty-two seconds. The only man to ever beat him is back and will enter the Hexagon on 6 June at Carnival City. Ruan ‘Fangzz’ Potts makes his return to EFC next month against France’s Cyril ‘Silverback’ Asker. The champion will have his eye on this massive bout as he is sure to face one of them in the not too distant future.

Catching up with the champ after his successful title fight, van Zyl had some interesting thoughts on Potts’ return to EFC, “I had a feeling that things would turn out this way. He (Potts) is a good competitor, but he battled in the UFC against bigger and stronger opponents.” Van Zyl added, “He is a strong grappler and has the ability to dominate, if he can get on top and finish you quickly. I feel he would have gained much experience from fighting abroad which makes him even more dangerous. Let’s wait and see.”

At the EFC 39 Post-Event Press Conference, Van Zyl expressed his respect for Asker and he echoed his thoughts in his interview, “Asker has got total game.” He continued with,” He is thick set and he will be a difficult person to deal with, his gas tank is big and he can take a pounding and keep coming.”

As for how van Zyl sees Potts vs. Asker will play out next month, he stated, “this will prove to be a great fight, Asker will ask questions of Potts’ stand-up and stamina, if he can keep it standing and push into the second without being submitted early.”

Does Asker have what it takes to put the former heavyweight champion away and take one massive step towards title contention, or will Potts make his triumphant return and put away the French threat? Find out at the milestone EFC 40 event as the two heavyweights collide.