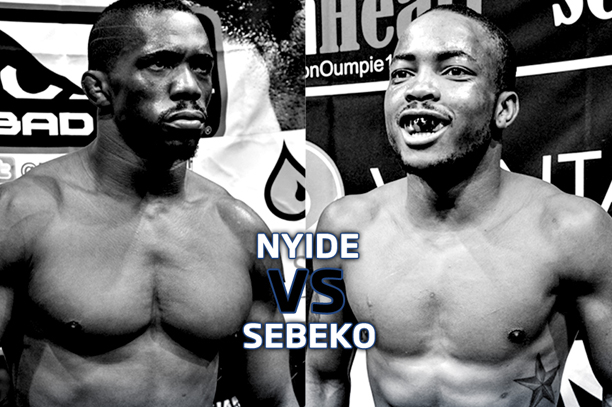 Johannesburg, South Africa – Durban’s Peter ‘Kratos’ Nyide has found his form in his new division and at EFC 41 he hopes to continue his dominance. Since the drop to bantamweight, Nyide has gone two and zero against notable opponents. As he attempts to get his third straight victory he will face one of his biggest challenges yet, Oumpie ‘Lionheart’ Sebeko.

There is good reason for Nyide’s moniker of ‘Kratos’, the Greek god of strength and power. Nyide is known for consistently putting on the most entertaining fights, and he often wins ‘Fight of the Night’ or a performance bonus for his efforts, once even breaking both his hands in the beginning of a bout and going the full distance. Now, he has proven he is not just there to take part, but is building a case as a potential contender.

At the last Cape Town event, Nyide’s opponent, Sebeko, showcased he has the striking skills to out-box a former world Muay Thai champion. Confident in his ground abilities Sebeko has proved to be a real threat on the mat and he has shown improvements in leaps and bounds in his ground game. As he continues his journey to becoming a more complete mixed martial artist, Sebeko faces a new threat on 11 July, in a tenacious and vastly skilled Nyide.

Both athletes are known for leaving it all in the Hexagon and this bout has ‘Fight of the Night’ written all over it. After the epic Katz vs. Groth fight from EFC 40, athletes are looking to go one better than history to scribe their own names in the books. Will Nyide vs. Sebeko live up to the challenge?

Watch this fight and seven more of the EFC 41 prelim bouts exclusively at selected Ster-Kinekor Theatres around South Africa.