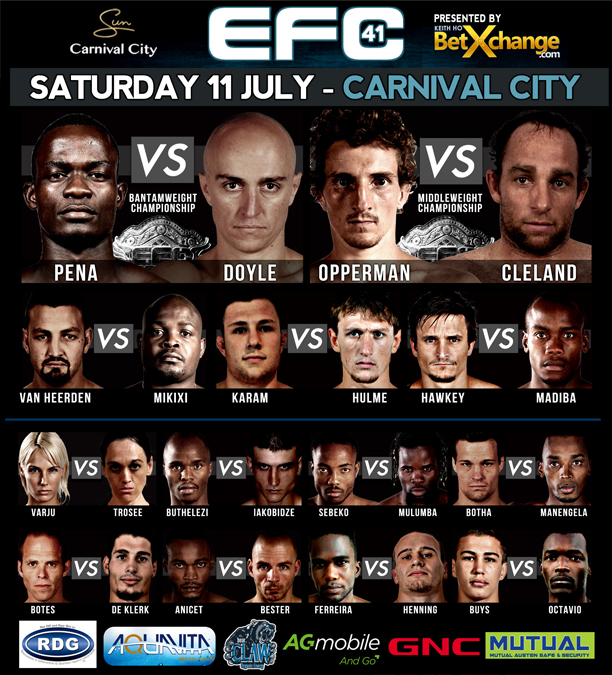 Johannesburg, South Africa– EFC returns to Carnival City for the massive double title fight card to be broadcast on TV around the world. The EFC 41 event is headlined by the most dominant champion in EFC history, Demarte ‘The Wolf’ Pena, facing his newest challenge in the form of the former Air Force Officer, Cedric Doyle. Tempers flared at this past weekend’s Media Day, when both men held nothing back during a heated exchange of threats with both refusing to back-off. EFC president Cairo Howarth was forced to separate the two men and Pena left the event immediately. As weigh-in day and fight night approaches, aggression is sure to continue to boil. Find out more about the build-up to this epic battle in the official countdown show here – https://youtu.be/2KNySJUjXnU

The vacant EFC middleweight belt is on the line and will be contested between former welterweight champion Michiel Opperman and grappling king Liam Cleland. Both Opperman and Cleland were set to face former champion Garreth ‘Soldier Boy’ McLellan in epic encounters. An injury removed Cleland from their previous clash and the former welterweight champion was promised a shot at middleweight gold. The two top contenders will now battle it out for the vacant championship. Find out more about their journey’s in their countdown show which can be viewed here – https://youtu.be/l_dqRllE1fw

Ahead of the two title fights, see a bout of two huge men with powerful hands and tenacious jaws, a big finish can be expected when when heavyweights Danie ‘The Pitbull’ van Heerden and Bernardo ‘The Black Panther’ Mikixi meet for the first time in the Hexagon.

The controversial Mark Hulme and Lyle ‘Krusher’ Karam look to make a solid mark on the welterweight division and opening the main card sees hometown star Tumisang Madiba and Durban’s Wesley Hawkey in what is expected to be one of the most action packed fights of the year.

But first, in the Ster-Kinekor headline bout, the beauty from Budapest, Zita Varju returns in search of redemption of her loss to face Pretoria’s own ‘Demolition Jacqui’, plus 7 more action-packed fights which are all only available live at Carnival City and exclusively broadcast to Ster-kinekor cinemas.