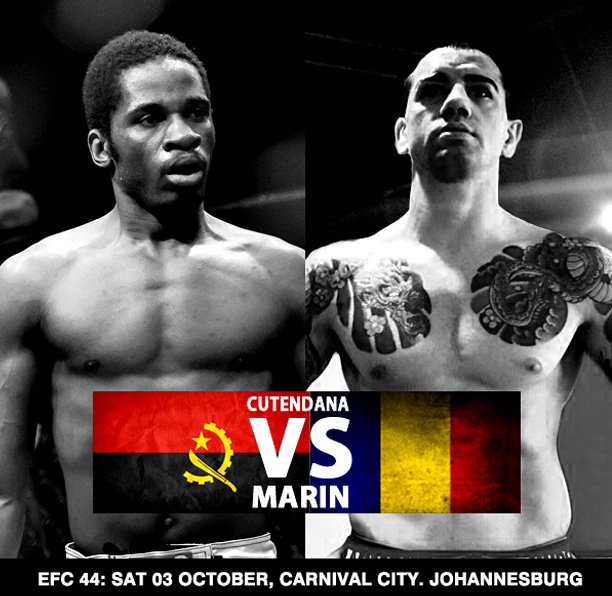 Johannesburg, South Africa – With the first flyweight champion having been crowned last month in Durban, there are several athletes searching for the opportunity to be next in line to challenge for the belt and to get the chance to dethrone the new division king Nkazimulo ‘Zulu Boy’ Zulu. Enter two new athletes to the flyweight division. One many EFC fans know as a solid bantamweight, Angolan Marino ‘The Scorpion’ Cutendana and the other a new face to the organisation who’s arrival was announced recently, Romanian Paul ‘El Empalador’ Marin.

Cutendana has been on an exceptional three fight tear through the bantamweight division, with two first round finishes and a closely won three round war most recently. After some deliberation with his training partners at Team CIT, Cutendana has decided to drop down to the flyweight division where he will be massive contender with a huge strength and size advantage over most of his competitors. His first fight in the new division will be no walk in the park as he faces the highly experienced Romanian.

Marin will enter the EFC Hexagon for the first time with a mega professional record of ten wins and four losses. While the majority of his wins come from TKOs and KOs, he considers his wrestling and Brazilian Jiu-Jitsu to be the strongest aspects of his skill set. He lives and trains out of the renowned Union MMA Paulau Team & Atos BFT Barcelona in Barcelona, Spain. The Romanian is also currently riding a three fight winning streak, which will bring a supreme confidence for his EFC debut.

Set as the opening bout for the main card for the massive EFC 44 event in October, this bout should set the tone with high paced action. En-route towards the right to challenge Zulu, both athletes will be looking to prove that they belong at the top of the division.