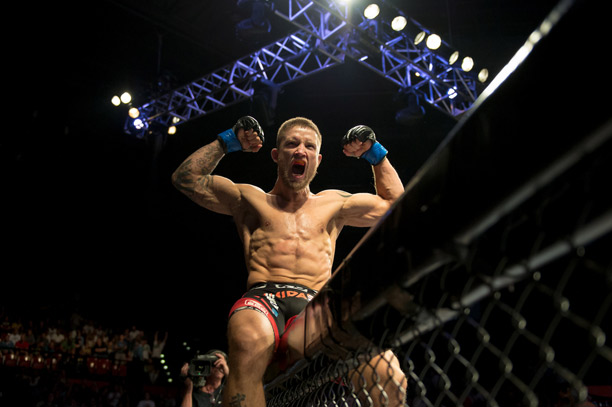 Johannesburg, South Africa – Considered unbreakable by many, Leon ‘Iron Lion’ Mynhardt has been undefeated for almost three years. In the process has captured and defended the EFC lightweight championship an impressive three times, all with early finishes. Now he faces a new threat, an undefeated contender from Zimbabwe that has finished everyone in front of him via submissions. A man so hungry for success, he cannot see any failure on his path. Enter Themba ‘The Answer’ Gorimbo.

With ferocious attacking and incredible strength, Mynhardt truly lives up to his moniker of ‘Iron Lion’. Mynhardt is also known for his love of fighting and competition, and this love and focus has propelled him throughout his career. “I’m always looking to improve and change my all round game… A lot of surprises await,” Mynhardt stated in an interview this morning.

When asked if Themba offers him any threats, Mynhardt responded, “I have been in many many wars and I will not be threatened by anyone or anything.” He continued, “When I’m in the Hexagon, I am 200% focused and I believe in the work I’ve put in, together with my coaches and team mates.”

Never one to back off from a challenge, Mynhardt welcomes his upcoming opponent Gorimbo to bring his best, “Everyone wants to be the champion, but once you’ve been there, you realize how much more effort it takes to stay the champion.” He added, “I thrive on that, and it enables me to work harder and smarter and live like a champion every single day, whether I’m training or not.”

Mynhardt has been a part of some of the most memorable battles in EFC history and promises to always bring a world class show when he steps inside the Hexagon. “I’m looking to put up a spectacular fight for fans to watch and enjoy.” Mynhardt continued, “Fans know what they are getting when I come to fight, a little bit of talk and a lot of fight…”

Mynhardt is confident of victory come 3 October, “I believe that I will remain the EFC lightweight champion because of the people in my life, my family, my girlfriend, my friends that are there for me and support me all the way and my other family coaches Morne Visser and Attila Barna and the guys at the gym that push me above all my limits. I believe that hard work and dedication are vital points in succeeding, to do what one sets out to accomplish.”