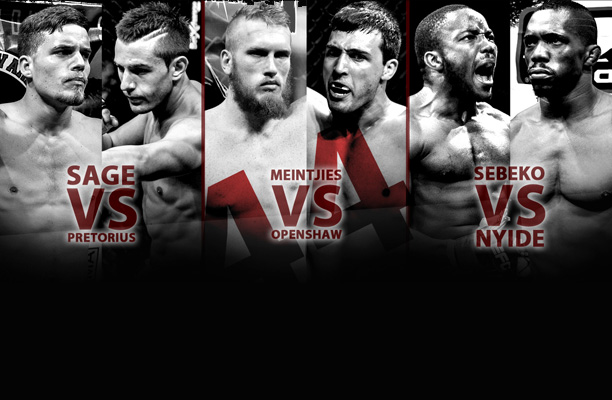 Johannesburg, South Africa – Next month’s EFC 44 event is building up to be the biggest fight card in EFC history, headlined by three EFC title fights, history will be made on Saturday 3 October at Carnival City. Three exciting prelim bouts have been added to the already enormous fight card.

Fresh off a win, Johannesburg’s Oumpie ‘Lion Heart’ Sebeko looks to go on a winning streak when he faces Durban’s ‘Fight of the Night’ maker Peter ‘Kratos’ Nyide in a catchweight bout. Traditionally bantamweights, both athletes opted for the slightly heavier weight due to a former Nyide suffering an injury and have been eager to get back in the Hexagon as soon as possible. Two incredible high-paced action fighters are set to go to war and put on a show for the fans.

Entering the Hexagon just ahead of Sebeko and Nyide will see Durban’s Cameron ‘Ginger Ninja’ Meintjes square-off with Pretoria’s Quaid ‘Hercules’ Openshaw. Meintjies is running an impressive two fight winning streak and a third in a row is sure to raise him to the upper echelon of the division and put him in line as a future contender. Meanwhile his opponent, Openshaw, who debuted with a spectacular first round finish in his and is now looking for a rebound victory after he recently suffered his first professional loss last month in Durban.

These are the first of many prelim bouts to be announced in the next few days in what will bolster a fight card that fans are sure to be talking about for years to come.

Undefeated in competition, and driven by a raw desire to survive, `The Answer` will stop at nothing when he faces the brute power, skill and experience of Pretoria`s favourite son, the `Iron Lion`.