Get to GrandWest early on Saturday 7 November 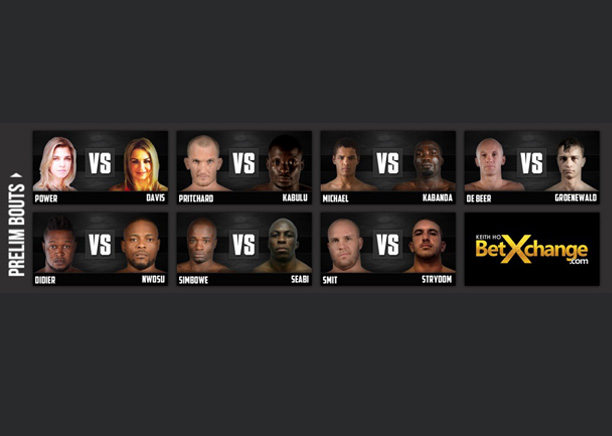 Cape Town, South Africa – Before any EFC event goes live on television around the world, a host of super talented athletes go head-to-head in the Hexagon. This is when some of the most exciting fights happen, and the only way to witness them is to see it firsthand live at GrandWest on 7 November.

“There are so many great match-ups on the prelim cards, I am pretty sure we will see the ‘Fight of the Night’ produced by one of them.” – EFC President Cairo Howarth

Power vs. Davis
For the very first time in Cape Town, EFC will feature women competing inside the Hexagon. Both England’s Kirsty Davis and South Africa’s Shana Power are looking to make an impact on the ever growing women’s flyweight division.

Pritchard vs. Kabulu
Port Elizabeth’s Cameron Pritchard is on a fiery winning streak, having finished all his opponents with alacrity and precision. He now faces his biggest challenge yet, in DRC’s Francois Kabulu. Will the visiting Pritchard continue his unbeaten run and go four and zero and move to the upper echelon of the welterweight division or will Kabulu stand his ground and return to his former winning ways?

Michael vs. Kabanda
Luke Michael made a picture perfect start to his career, winning his first two fights with early finishes. He then faced former contender Sibusiso Mdoko and found his lack of experience the yielding gap in his game. Now with less of a weight cut to make, Michael has moved to welterweight and will face the undefeated Kaleka ‘Block’ Kabanda, who is in a very similar position to Michael prior his first loss ever.

De Beer vs. Groenewald
Much like Pritchard, Durban’s De Beer is running a three fight win streak and seems unstoppable at present and a definite future contender in the talent rich bantamweight division. This time, he faces a formidable opponent in former contender Francois Groenewald; a phenomenal Brazilian Jiu-Jitsu fighter with a host of submission victories. Groenewald has returned to the bantamweight division, where he feels stronger and more capable.

Didier vs. Nwosu
Expect firewroks when DRC’s Knife Dider and Nigeria’s Steve ‘Soldier’ Nwosu collide in the Hexagon. Two incredibly heavy hitters with one-punch knockout power! Do not blink during this bout or you are bound to miss the action.

Simbowe vs. Seabi
Zambia’s Rob Simbowe made a spectacular debut by winning his first fight with a devastating Heel Hook in the dying seconds of the first round. His opponent, Conrad ‘Cagewise’ Seabi is a highly touted kickboxer with lightning fast hands and feet. Having lost his debut to a former contender, he wants to live up to his reputation and represent his new camp the only way he knows how, with a massive KO.

Smit vs. Strydom
The opening bout of EFC 45 is sure to kick things in style. Durban’s Gary Smit brings a fully rounded range of skills to the hexagon that is rarely seen in the heavyweight division. Capable of massive head kicks, as well as a controlling ground game; it is no wonder he won his EFC debut in the first round. He faces a bigger task this time in Port Elizabeth’s Ivan Strydom, a professional boxer with monstrous strength and knockout capabilities.

Watch these fights live and exclusively from GrandWest ahead of the 5 main card bouts.