THE COUNTDOWN TO EFC CAPE TOWN HAS BEGUN 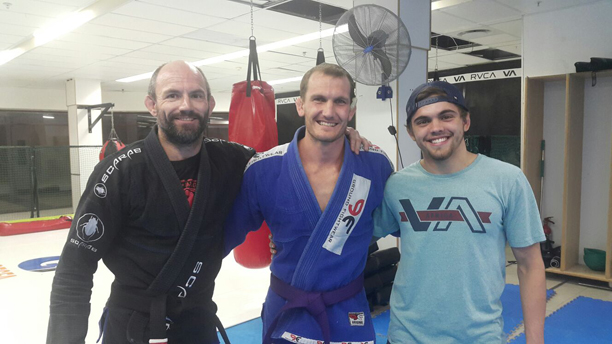 Over the broadcast and training session, many things were seen of and said by the three athletes, including a few words from their head coach, the former EFC heavyweight Rico Hattingh.

Some highlights of what went down over the broadcast are:

“When Kabulu came here, he was really one dimensional. We have fixed up some of his bad habits and that sort of thing. Now it is just a matter of time… Francois now is a complete different guy.” – Rico Hattingh on Francois Kabulu

“It is going to be a test now, because he doesn’t have to cut weight.” – Rico Hattingh on Luke Michael’s first fight at welterweight

“He is a strong guy, good with takedowns, he can take down anyone in South Africa if he wants to.’ – Rico Drotschie’s opponent Champion Dalcha

“This fight is gonna be better than the last one against Tumelo. He likes to wait for you to come to him where-as Dalcha is aggressive and likes to apply pressure. He is a much better opponent for me.” – Gideon Drotschie comparing his previous opponent to his upcoming opponent

“I want that knockout so bad.” – Gideon Drotschie on how he wants to finish the fight

You can watch the full broadcast on Perscipe here: https://www.periscope.tv/w/1kvKpNaqVnkJE

Make sure to follow EFC on Periscope here and never miss a second of all the exclusive footage: www.periscope.tv/efcworldwide

Keep a look out for more behind the scenes training and interviews with EFC 45 athletes over the next few days.