Athletes hit the scale ahead of Saturday night 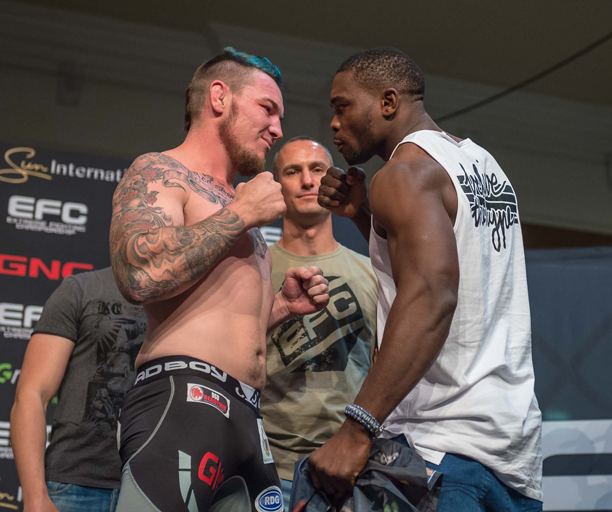 Four athletes are in play to earn a shot at notorious champion Norman ‘Chef’ Wessels. Former champion Gideon ‘Juggernaut’ Drotschie faces the phenomenal Congolese born Champion Dalcha, and power punching Tumelo ‘The Truck’ Maphutha takes on former heavyweight champion Ruan ‘Fangzz’ Potts. Competition between the four is fierce. Drotschie suffered a controversial loss to Wessels and an even more controversial reversal of an immediate rematch after his bout with Maphutha. Potts is itching to repeat his 2011 victory over Wessels, who spurred by that loss has remoulded himself into a terrifying champion. It’s inches only that separates the four.

All four men hit their weight perfectly. A deep respect was shown between Maphutha and Potts, both legends of the organisation. Potts’ recent drop down to the light heavyweight division puts them in competition for the first time.

Ever the entertainer, Drotschie played to the crowd by mimicking Dalcha’s now famous weigh-in antics, an on-stage shuffle that spawned a host of viral Youtube videos at the last Mother City event.

Completing the trio of top contender fights, former heavyweight champion and Cape Town local Brendon Groenewald faced off against the Polish giant Tomasz Kowalkowski. Groenewald has a massive task ahead of him tomorrow, taking on the massive reach and power of the Pole who is riding high after a brutal first round knee to the jaw knockout win.

The Market Hall rang to the shouts of strong support for all of the athletes, particularly from the passionate Congolese community who chanted ‘Strong as a rock, strong as a rock!’ to their hero Champion Dalcha. Heartwarmingly, the crowd adopted British athlete Yannick Bahati as one of their own, who was born in the Congolese town of Goma.

‘It’s lifted my spirits a huge amount,’ said an elated Bahati after. ‘I didn’t expect that coming to a foreign country. It feels like my home away from home.’

Only one athlete failed to make weight. Conrad Seabi hit the scale at 74.3kg, making him 4.3kg overweight. His opponent Robert Simbowe has agreed to fight Seabi at his heavier weight.

‘Forget about me, forget about everything. If you can’t respect me, at least respect yourself as a professional athlete,’ said an incensed Simbowe.

The full EFC 45 weigh-in results were as follows: