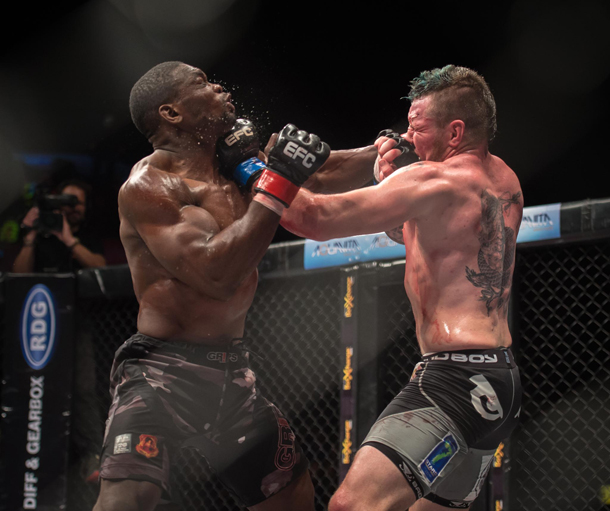 Cape Town, South Africa – Capetonians were treated to a barrage of tough-as-nails mixed martial arts at the GrandWest Grand Arena tonight. Headlined by the hotly anticipated clash between former light heavyweight champion and the powerhouse from the Congo, Champion Dalcha, strong performances were seen by athletes all throughout the card.

Drotschie and Dalcha entered their bout as even favourites, a prediction proved right in the first two action packed rounds. Drotschie managed to counteract Dalcha’s immense power with careful strategy, opting to alternately grapple Dalcha or weaken him with kicks from the outside.

A deep cut to the forehead sapped his will, however, and Dalcha pounced with a trademark blistering takedown and savage ground and pound, prompting Drotschie to verbally submit in the fourth round.

Punching phenom Tumelo Maphutha lived up to his name with hard, technical striking against former heavyweight champion Ruan Potts, who entered the light heavyweight division for the first time. Maphutha picked Potts apart with precise counter punches, earning himself a decision victory. Maphutha’s careful style has been criticised as tedious, but he continues to rack up the wins.

Former heavyweight champion Brendon Groenewald re-entered the win column. He faced the terrifying Polish giant Tomasz Kowalkowski, who with his long reach posed an immense threat to the shorter Capetonian. Groenewald patiently worked for the opportunity to take the Pole to the ground, first weathering a storm of knees, where he finished the bout by triangle in the first round. He has once again shown his submissions pedigree, which he unwisely abandoned in a stand-up strategy in his last champion’s loss against Andrew van Zyl. In the press conference after he assured fans that the cool-headed, intelligent Groenewald is back.

UK based teammates Yannick Bahati and Joe Cummins completed a clean sweep against Bloemfontein’s Warren Allison and Cape Town based Congolese athlete Bruno Mukulu. Bahati impressed with intense pressure against Allison from the outset, taking the South African down and dispatching him with a keylock submission in the first round.

“Warren is one of South Africa’s best ground fighters,” said Bahati afterwards. “I wanted to show everybody that I’m a threat in every area.”

Cummins put on a superb display. Admitting to a rib injury early on, he kept the bout standing, showing excellent technique in fighting against the fence while chipping away at Mukulu’s defences with accurate strikes when the opportunity arose. The close of the third saw him pounding Mukulu with hard ground and pound, a finish denied him by the buzzer. Cummins has announced himself as a new threat in the welterweight division.

EFC’s rapidly expanding women’s division was given a major boost with the debut of Shana Power, fighting out of Johannesburg’s team Fight Fit Militia. Power took on Britain’s Kirsty Davis, and finished her in under two minutes with deadly leg kicks, a spinning back fist that had the Brit reeling, and a barrage of one-two’s resulting in a TKO.

‘Fight of the Night’ was awarded to the welterweight bout between Joe Cummins and Bruno Mukulu. Performance bonuses were awarded to Shana Power and Brendon Groenewald.