GOING TO MAKE HIS SOUL QUIT AND HIS SPIRIT GIVE UP 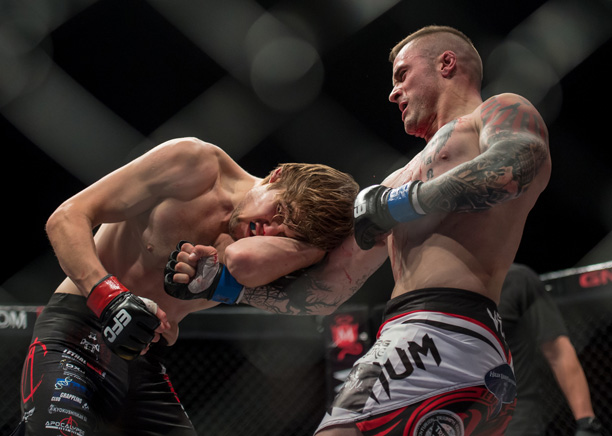 Johannesburg, South Africa – Several years ago, EFC 46 athletes Gordon “Rage” Roodman and Keron “Skinner” Davies faced each other as amateurs in what has been described by witnesses as the most exciting and savage war ever experienced in amateur MMA competition. Since both athletes signing with EFC, fans have been calling for a rematch between the two warriors on the big stage in the EFC Hexagon. On 12 December, this will finally come to pass at the final EFC event of the year.

For the multitude of fans that were not able to ever see this bout live, Roodman gives some background, “The rivalry started when Keron as an amateur was preparing for a middleweight title fight when his opponent pulled out three weeks before the bout. I then received a phone call and was offered to face Keron for the vacant title. I had not been in training camp so I was not prepared as well as I could’ve been, but, when the fight was offered to me I could not turn down the opportunity. With only 19 days to prepare for the fight, Keron and myself put on what is arguably the greatest MMA fight outside of the EFC ever seen in South Africa.

Roodman is adamant that this time things will be different under the big lights and stage of the EFC Hexagon and a full training camp behind him. “I am much more evolved as a fighter from the time I faced Keron back then. I have not seen much evolution in his MMA game in his previous fights but saying that, I am still not taking him lightly. On fight night, I will be the better fighter!”

When asked how he sees the fight going, Roodman responded, “I will be getting in his face and I am going to make his soul quit and his spirit give up. For an athlete like Keron the finish can come from anywhere, you never know what kind of fight it will be. That being said I will finish him no matter what the situation.”

Watch this and six more exciting prelim bouts ahead of the massive five main card fights. Live and exclusively at Carnival City.