‘THE MAJOR’ MARCHES IN AS REPLACEMENT TO FACE DU PLESSIS 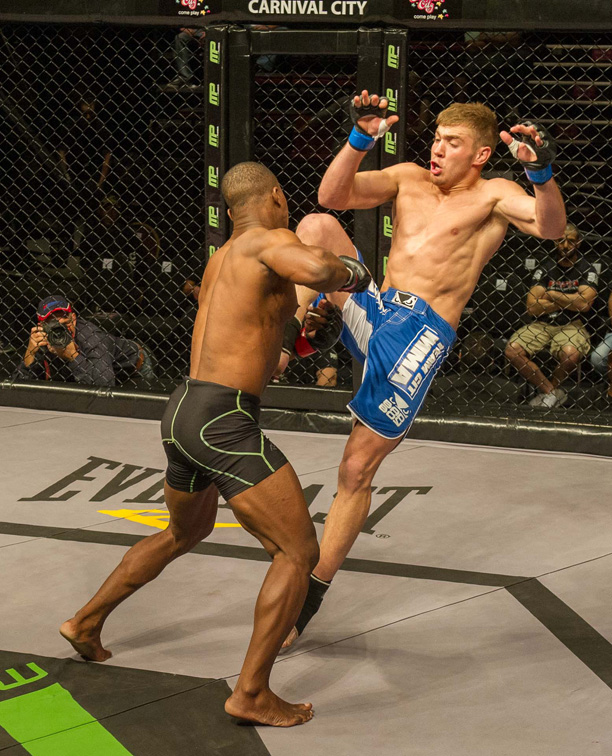 Johannesburg, South Africa – Bruno ‘The Major’ Mukulu has been called in as a replacement for Ireland’s Henry Fadipe to take on Dricus ‘Stillknocks’ Du Plessis on the main card at EFC 46. Fadipe, who has once again suffered passport and VISA issues, and now finds himself with an expired passport, will not be able to enter the country to make his much anticipated return since losing the welterweight belt.

Mukulu who just came off a ‘Fight of the Night’ performance against Joe Cummins at EFC 45, was confident and eager to take the fight against Du Plessis, the man who defeated him on his EFC debut years ago. ‘The Major’ prematurely leaked the announcement that he would be stepping in to face Du Plessis on social media yesterday.

“I am ‘The Major’, a fighter for life. I am always ready all the time. I never stop training even after my fight. Now that Fadipe can’t make it again for EFC 46, against Dricus Du Plessis for his lack of passport reason or whatever, I don’t even care about why he can’t make it. All I care about is stepping up and facing Dricus for my revenge. I can’t wait to face you once again. This time it will be a war, I am going to bring a very new fight style from Congo. You must put me to sleep or break my bones because I am not going to tap. When you have given everything you have and it does not work then it will be my turn, and my way is to win in anyway no matter what.” – Bruno Mukulu

Du Plessis, was quick to respond to Mukulu’s post and commented with the following: “There is no passport problem there, I see only one reason and that is fear. The kind of fear that comes if you don’t prepare long and hard enough and you realise you won’t be ready for the mountain that is in front of you.”

Englands Joe Cummins was the EFC matchmakers first choice as a replacement for Fadipe, but the Englishman is still suffering from injured ribs and was not able to answer the call up, as explained by EFC matchmaker Graeme Cartmell on Facebook prior to the official announcement, “…We have put in counter measures to ensure a great fight happens…. We’ve offered top contender Joe Cummins an opportunity to step in against Dricus du Plessis but he is nursing some EFC 45 injuries so it’s going to be difficult for him to commit. After Bruno Mukulu’s ‘Fight of the Night’ performance against Cummins at 45 and his readiness, he is the natural choice to step in and create a war if need be.”

‘The Major’ aims to march back to winning ways and plans to avenge his EFC debut loss to the highly motivated contender Du Plessis at the final event of the year.