Roodman vs. Davies moves to opening bout on main card at EFC 46 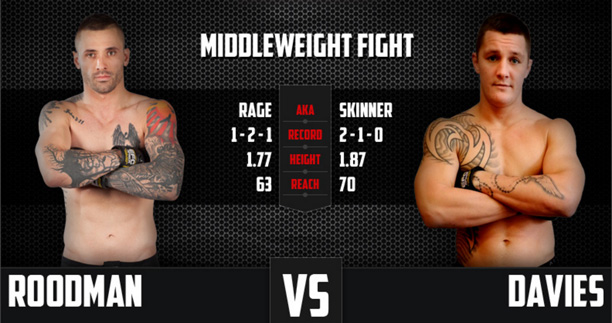 Johannesburg, South Africa – Yesterday EFC matchmaker Graeme Cartmell announced that main card bout ‘Demolition Jacqui’ Trosee vs. Amanda ‘Mad Dog’ Lino had been postponed to the first EFC event of 2016, leaving a gap on the main card. After much discussion at EFC HQ, it was decided that Gordon ‘Rage’ Roodman vs. Keron ‘Skinner’ Davies would get the nod and become the opening bout on the EFC 46 main card.

Amanda Lino has had to pull off the fight against Jacqualine Trosee for medical reasons. We think that is a really big fight, so what we are going to do instead of replacing it, we are going to move it to next year. It will be on the first card of next year,” explained Cartmell. He continued, “The hardest choice that we have had to make here, is who goes on to the main card. There are so many good fights at EFC 46. Any single one of them could make their way onto the main card.” Cartmell concluded, “But one video in particular, with Gordon Roodman that we put out today has made it the obvious choice. Gordon Roodman, Keron Davies, main card 12 December.”