TWO TITLES ON THE LINE 5 MARCH 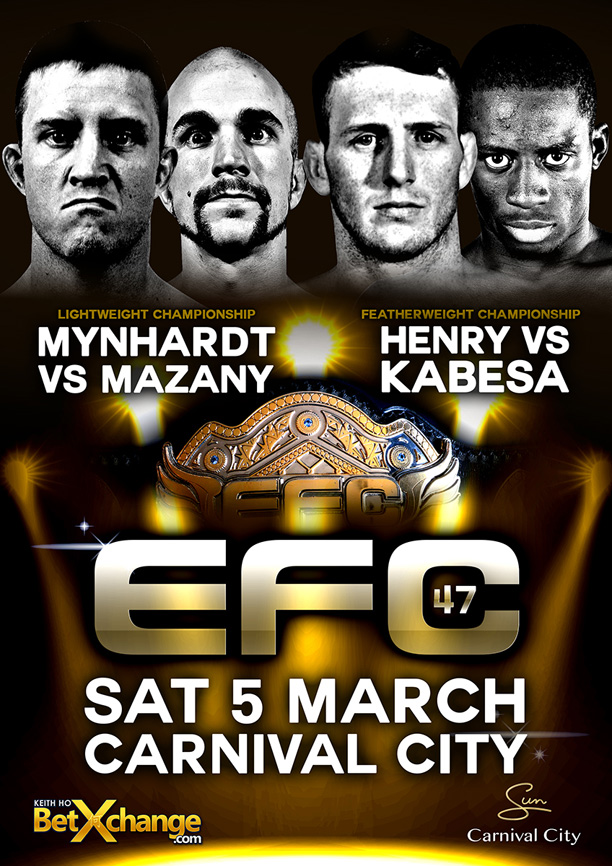 Johannesburg, South Africa – 2016 is set to be a massive year for EFC fans, with ten huge events scheduled throughout the year. Kicking off the action sees the EFC lightweight and featherweight titles on the line as the headlining fights at EFC 47 at Carnival City on 5 March.

In the main event of the evening, American Dave ‘The Pain Train’ Mazany is set to challenge South Africa’s dominant lightweight champion Leon ‘Iron Lion’ Mynhardt. Mazany made a massive impact on EFC when he defeated the first ever lightweight champion Wentzel Nel in a non-title fight almost five years ago. In 2015, Mazany made his charismatic return to the Hexagon, with an impressive second round TKO over former contender Sibusisu Mdoko. Mazany laid claim to the belt and the right to be the number one contender in his post-fight interview. Now is his chance to prove he is deserved of the belt, but standing in his way is a mammoth task, in the sublime and ferocious striking of Mynhardt. The ‘Iron Lion’ is the most dominant champion in the history of the lightweight division, and is the fan favourite to take another victory.

Plus, the man that caused one of the biggest upsets in EFC history by defeating former champ Boyd Allen, Scotland’s Danny Henry returns to prove why he is the best in the organisation. In his first featherweight title defence he is set to take-on DRC’s undefeated Igeu ‘Smiley’ Kabesa. Henry had a stellar year in 2015, winning all three of his fights inside the Hexagon, all within the space of four months. Kabesa has been antagonizing Henry and calling for his shot since claiming the belt in October. Now riding a six fight win streak, the wrestling phenom has dropped down to featherweight in order to challenge for the belt as he looks to build his own legacy.