BAHATI TAKES GOLD BACK TO BIRMINGHAM 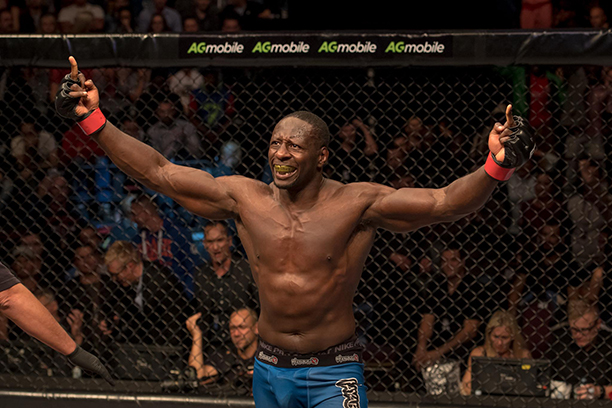 Johannesburg, South Africa – Universal warfare was guaranteed in the build up, and certainly delivered on its promise at EFC’s 49th edition at Carnival City this evening. Headlined by the vacant middleweight title fight between JP Kruger and Yannick Bahati, the man from the midlands was crowned the victor and will take the middleweight strap to the United Kingdom.

As the main event was introduced by Hexagon announcer Shane ‘The Duke’ Wellington to a packed house at Carnival City, it was clear that Bahati’s antics at the weigh-in the day before had fuelled the partisan crowd as they raised the roof for Kruger. The hometown hero responded to the crowd, with some great striking from range and seemed to have Bahati in trouble early in the first round, but things changed as soon as the Black Mamba got the takedown. Working his top game to great effect, Bahati maneuvered Kruger with ease into a position where he was able to work an eventual kimura. A clearly disappointed Kruger seemed no match for Bahati as soon as the fight went to the mat, but was gracious in defeat and promised to come back stronger. Bahati’s confidence rang through to post event press conference, maintaining his stance that he is not only clearly the best middleweight in the division, but believes he is the best fighter in the organisation.

In the second to last fight on the main card, seasoned EFC veteran Andrew van Zyl claimed a TKO victory over Polish giant Tomasz Kowalkowski. Coming in to the fight billed as one of the most dynamic heavies in the division, Kowalkowski was manhandled by a far heavier van Zyl, who seemed to move the Pole around like a rag doll once he assumed top position. The fight was stopped by referee Ferdi Basson after van Zyl rained down his ground and pound from full mount.

Joe ‘Silk’ Cummins’ fortunes were in contrast to his teammate Bahati, after he lost a three round grind with Themba ‘The Answer’ Gorimbo. In what can be best described as a grappling war, the bout failed to live up to it’s immense hype. Both Gorimbo and Cummins were renowned for putting on a show but both athletes seemed to cancel each other out. Gorimbo controlled the majority of the exchange, resulting in a unanimous decision victory. The most exciting exchange between the two was saved for the post event press conference, where the two were involved in a heated exchange after being questioned on the entertainment value of their fight.

Gorimbo’s FFM team mate, JP Buys, delivered his best performance to date by dominating seasoned campaigner Abdul ‘Hollywood’ Hassan to a TKO victory. Buys looked superior in all aspects of the game from the get go. Buys now has the world at his feet and can continue to build his case for gold at either flyweight or bantamweight.

Opening the main card on the night were Brendon Katz and Wesley Hawkey, the second bout between the two after Hawkey had made light work of Katz at EFC 33. Coming into the fight, Katz seemed to be a different prospect and promised to put up more of a challenge to the confident Durban native. Here is information donated types of games like apps and see online friv games, which are played on devices and gadgets, such as laptops, mobile phones and others. Many of these games can be found on various websites and some of them are free. Katz failed to live up to expectations though, as Hawkey took advantage of an out of sorts opponent by picking him apart with some solid strikes. The bout was stopped early in round one after Katz failed to protect himself from an onslaught of Hawkey strikes.

‘Fight of the Night’ was awarded to the middleweight bout on the undercard between Mark Kamba and Mzwandile Hlongwa. Performance bonuses were awarded to Wesley Hawkey, JP Buys, Wessel Mostert and Mthobisi Buthelezi.

EFC 50 takes place on Friday 17 June at Sun City in North West Province. Tickets are on sale soon at www.computicket.com, all the main card bouts will be broadcast live on kwesesports.com starting 20:00 (CAT) and delayed live on e.tv after the 20:30 (CAT) movie.