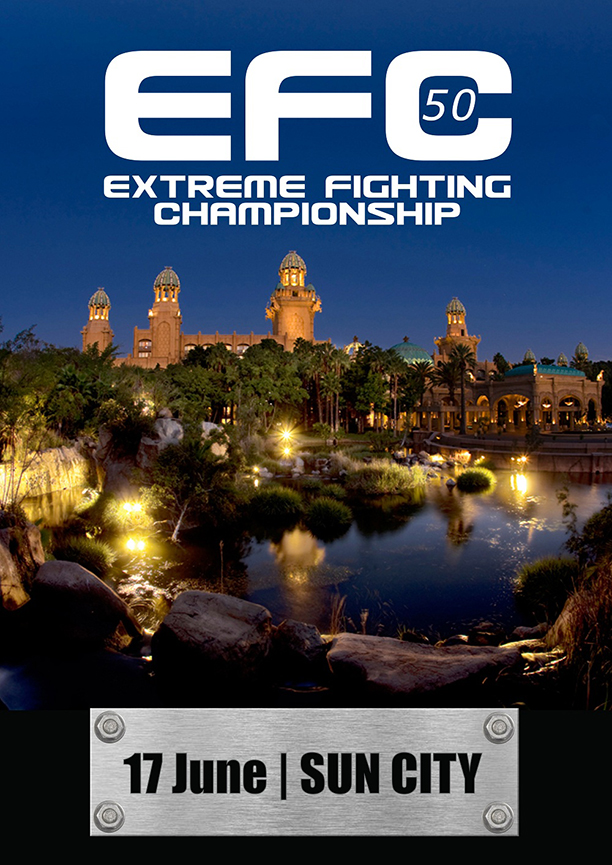 Sun City, South Africa – Rumors have been circulating since EFC President Cairo Howarth announced at the EFC 48 post-event press conference that the milestone EFC 50 event will take place at a new EFC venue. It has now been announced that Sun City will be the setting for EFC 50 scheduled for Friday 17 June.

“We are incredibly excited to announce that EFC 50 will take place at non-other than the ultimate holiday and entertainment destination, Sun City!” said Howarth. He continued, “It is only fitting that such a historic event should be at such an unbelievable venue. Along with a mega line-up of fights including the yet to be revealed welterweight championship fight, the event setup and experience will be host to a number of new and one-off additions. The fight card is nearly complete and will be announced soon. Get ready, Sun City here we come!”

Sun City is a luxury resort and casino, situated in the North West Province of South Africa. It is located between the Elands River and the Pilanesberg, about two hours’ drive from Johannesburg. Host to other mega events such as the Nedbank Golf Challenge, Sun City will play the perfect venue for an event of such magnitude as EFC 50.

EFC 50 is set to take place the Friday immediately after 16 June, a South African public holiday known as Youth Day. The date gives the perfect opportunity for fans to make a long weekend get-away and enjoy fights in an exquisite, world-class resort. The weekend will end on 19 June, Father’s Day.

EFC 50 takes place on Friday 17 June at Sun City in North West Province. Tickets are on sale soon at www.computicket.com, all the main card bouts will be broadcast live on kwesesports.com starting 20:00 (CAT) and delayed live on e.tv after the 20:30 (CAT) movie.