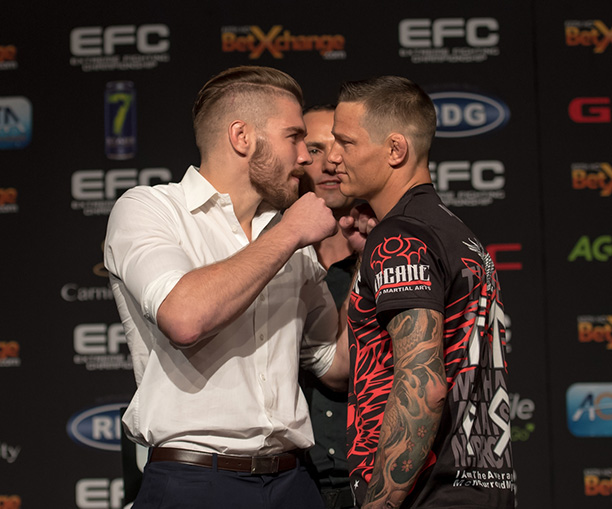 Sun City, South Africa – EFC will host its landmark 50th event at the ultimate destination of Sun City on 17 June 2016. Last week it was announced that Pretoria’s Dricus ‘Stillknocks’ du Plessis would face Johannesburg’s Martin ‘The Punisher’ van Staden for the vacant EFC welterweight championship but details of further bouts were unclear.

Speculation as to who would feature on the historic bill was rife, but that was only until the EFC 49 press conference took place and EFC president Cairo Howarth revealed all.

In one bombshell announcement Howarth broke the news: “We got Michiel Opperman vs. Rafal Haratyk, Shana Power vs. Micol Di Segni, Chad Hanekom vs. Cian Erraught, Ruan Potts vs. Vandam Mbuyi, Elvis Moyo vs. Ricky Misholas and there are some more to come. It is going to be a killer card on the 17 of June.”

Both South Africa’s Shana ‘Titanium’ Power and Italy’s Micol Di Segni made big impacts on fans with their respective victories on their debuts. Power TKO’d Kirsty Davis with a devastating spinning back-fist and Di Segni controlled South Africa’s Eliasov for three rounds with her superior striking and wrestling. Now fans will get to see two of the best female flyweights go toe-to-toe for the number one contender spot.

Set to open the historic EFC 50 main event in a massive light heavyweight battle sees a bout between South Africa’s Chad ‘Superman’ Hanekom and Ireland’s Cian ‘Kong’ Erraught. Hanekom, who notably trains with the polarizing EFC champion Norman Wessels will face ‘Kong’, a training partner to the notorious UFC champion Conor McGregor. Both are former rugby players who moved to MMA and both are undefeated in their professional careers.

The Zimbabwean Bomber, Elvis Moyo takes-on DRC’s Ricky ‘Apocalypse’ Misholas in the headlining prelim bout. These are, undoubtedly, two of the biggest punchers in the heavyweight division.