KABESA: JUST BEING SIGNED TO FIGHT ME GIVES YOUR CAREER CREDIBILITY 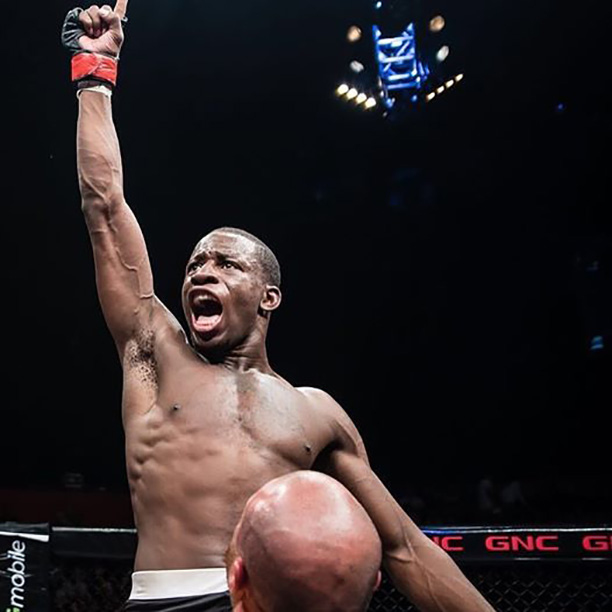 Johannesburg, South Africa – It was recently announced that undefeated and EFC champion Igeu ‘Smiley’ Kabesa would be defending his title for the first time at EFC 51 on 15 July at Carnival City. His first challenger is non-other than multiple African wrestling champion and knockout artist Hanru ‘The Bully’ Botha.

Kabesa defeated Scotland’s Danny Henry to claim EFC gold and will now face a challenge in a form he has never faced inside the Hexagon before. Both men are renowned wrestling champions and have brought their own unique styles to the Hex, Hanru with his devastating power and Kabesa with his dynamic alacrity.

Last week, Kabesa took to social media to express his thoughts on his upcoming opponent and all future challengers:

“I am the pound for pound best fighter in EFC!
Look at my stats and my record!
Undefeated in my entire career and I finish fights!
I have run through 2 of Europe’s best fighters to become EFC Champ!
I became a contender by beating a UFC prospect 2 divisions above me and snatched the title away from a European champion.
Just being signed to fight me gives your career more credibility.
I wouldn’t want to fight me, Hanru and any future contenders need to consider what they are signing up for when trying to contend for my title!
Maybe EFC should pay them to sit out… That’s the smartest thing for their career.”

Kabesa has always shown supreme confidence, whomever he faced; but how will he deal with Botha, bringing a more savage version of his wrestling?

This bout takes place on the main card at EFC 51 as the co-main event to South Africa’s Leon ‘Iron Lion’ Mynhardt vs USA’s Dave ‘The Pain Train’ Mazany for the EFC lightweight championship.

EFC 51: Mynhardt vs. Mazany, Kabesa vs Botha takes place on Friday 15 July at Carnival City, Johanneburg. Tickets available soon at www.computicket.com, all the main card bouts will be broadcast live on www.kwesesports.com starting 20:00 (CAT) and delayed live on e.tv after the 20:30 (CAT) movie.