OVER 2.6 MILLION WATCH EFC ON TV IN SOUTH AFRICA 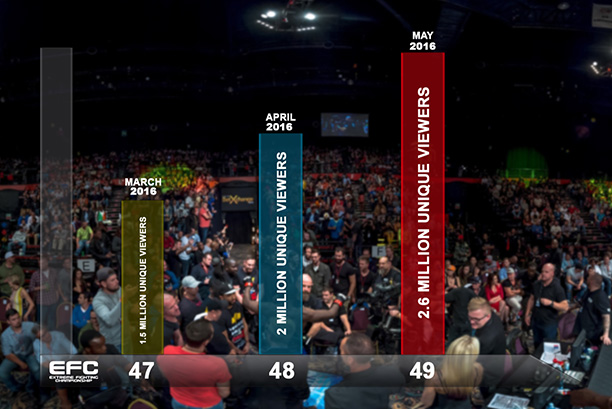 Johannesburg, South Africa – The phrase ‘”the fastest growing sport in the world” has never rung as true for MMA as now, with the latest TV ratings decimating all past records. Over 2.6 million unique viewers watched the recent EFC 49 event on television in South Africa alone!

On the Friday evening of 13 May, EFC 49 captivated fans and dominated the airwaves, drawing 26% of the total available audience in the country, substantially increasing the usual e.tv audience, and completely outperforming all other shows, becoming the most watched programme on TV in South Africa at that time by a long way.

“2.6 million people is a massive audience and the growth from month-to-month says a lot about the sport and the brand,” stated EFC president Cairo Howarth. “More fans than ever before are tuning in and following EFC. To put the ratings into perspective, more fans in South Africa watched EFC 49 on TV than watched the live broadcasts of Springbok games during the Castle Rugby Championship in 2015.”

EFC 49 was also broadcast live to millions more viewers around the world on major TV networks, as well as throughout Sub-Saharan Africa with the continent’s ultimate sports content provider, Kwesé Sports.

The spotlight now shines on the mega event EFC 50: Du Plessis vs van Staden for the welterweight championship, taking place on Friday 17 June at the ultimate destination, Sun City. Tickets are on sale soon at www.computicket.com, and the 5 main card bouts will be broadcast live on kwesesports.com starting at 20:00 (CAT) and delayed live on e.tv after the 20:30 (CAT) movie.