Foreigners leave their mark on the EFC 49 official weigh-in 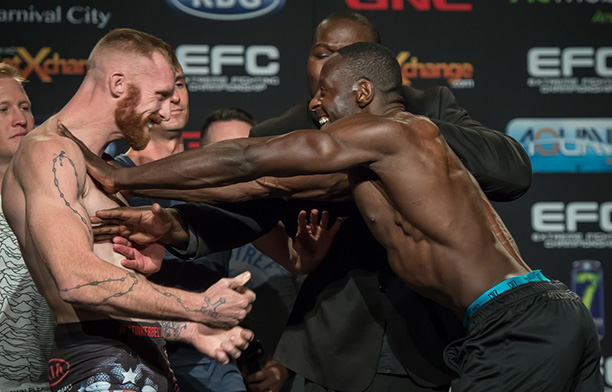 The event is headlined by the vacant EFC middleweight title fight between fan favourite and East Rand native JP ‘Tinkerbell’ Kruger and the British behemoth, Yannick ‘Black Mamba’ Bahati. The tension peaked when Kruger and Bahati faced-off as the mood took a more aggressive turn from last week’s more respectful media day. Upon facing off, Bahati shoved Kruger back in a show of superior physicality.

Kruger responded in his home language quoting an African proverb, “Mountains may never meet, but real men do”, alluding to tomorrow’s fight. Kruger continued, “You don’t come to my country and not show respect. I am going to teach you some manners.” In his interview Bahati kept his comments simple, “I have said this before, he is sloppy on his feet and a white belt on the ground. I am going to pressure him and finish it.”

In the penultimate bout of the evening, South Africa’s Andrew ‘One Gear’ van Zyl; a former two-time heavyweight champion, takes on the tallest man in the organization, Poland’s Tomasz “Kredka’ Kowalkowski. In contrast to the other bouts, the giant heavyweights carried a ‘still waters run deep’ air about them. While not openly aggressive, witnesses can look forward to an impending war.

A highly anticipated welterweight fight takes place between Zimbabwe’s submission specialist Themba ‘The Answer’ Gorimbo and England’s undefeated Joe ‘Silk’ Cummins. A fired up Gorimbo charged Cummins straight off the scale, with what has become his infamous pre-fight fire; while Cummins stood non-vexed by Gorimbo’s tactics.

Also featuring on the main card, two of the best grappler’s in the organization will meet when seasoned athlete Abdul ‘Hollywood’ Hassan and the promising JP Buys will go head-to-head. And set to open the main card sees a rematch filled with bad blood between Johannesburg’s Brendon Katz and Durban’s Wesley ‘Young Assassin’ Hawkey.

On the prelim card, a last minute fight change was announced thirty minutes before the official weigh-in took place. Jeff Madiba arrived at the pre-weigh-in medicals six kilograms’ overweight. It was decided by officials and EFC that the weight discrepancy between him and his scheduled opponent Amos Hlatswayo was too great and it was decided it would be unsafe to hold the bout. Alain Ilunga stepped in as a late replacement, as he had had his fight against Anicet Kanyeba cancelled two days ago.

The full EFC 49 weigh-in results were as follows: