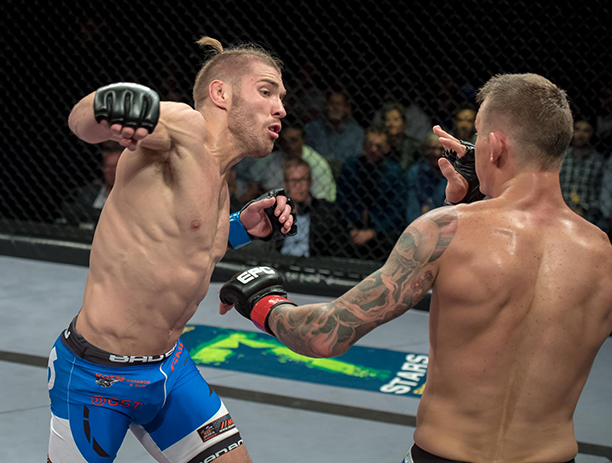 Du Plessis faced the legendary Martin ‘The Punisher’ Van Staden in front of a sold out crowd.

Van Staden began the fight with an unexpected takedown and proceeded to control the first round. The second belonged to Du Plessis after a thundering right cross prompted a takedown of his own. Multiple submission attempts were ultimately foiled by the bell, setting up a thrilling third round. After a D’Arce Choke attempt by each a Guillotine Choke finally clinched the victory for the young phenom.

The ladies’ flyweight division took centre stage in the preceding bout, and delivered intelligent and clinical mixed martial arts. For three rounds South Africa’s Shana ‘Titanium’ Power used her reach advantage to control the Italian Micol Di Segni with a variety of strikes. Di Segni, unable to carry out her gameplan, showed her strength and resilience by fighting to the final bell. Power’s unanimous decision victory seals her a number one contender spot.

Stepping in on late notice, crowd favourite Gordon ‘Rage’ Roodman took his heavy-handed style to Rafal ‘The Polish Tank’ Haratyk. Both men landed big shots in a flurry of vicious exchanges. Haratyk landed a flush punch on the jaw of Roodman deep into the first, dropping him and forcing the referee to step in.

The Pole is now riding a three fight winning streak. This combined with bruising form will see him fighting for a top contender spot soon.

Ruan ‘Fangzz’ Potts faced the gargantuan DRC native Vandam Mbuyi. Potts fought with patience, initially drawing frustration from the crowd, but once he engaged made short work of Mbuyi. Quickly taking the fight to the ground, the former two-time champion hunted the submission and sunk an Armbar finish. His win signals the return of a looming threat in the division.

Opening the main card South Africa’s Chad ‘Superman’ Hanekom took on Ireland’s Cian ‘Kong’ Erraught. This bout was predicted as a possible fight of the night, and delivered. Big hits and massive takedowns punctuated the first round and continued into the second. Nearing the break an exhausted Hanekom ended the carnage by sinking a Rear-Naked Choke, winning his second consecutive EFC bout.

EFC 50 results are as follows:

EFC 51: Mynhardt vs Mazany, Kabesa vs Botha, presented by SUPABETS, takes place on Friday 15 July at Carnival City, Joahnnesburg. Tickets are on sale at www.computicket.com, all the main card bouts will be broadcast live on kwesesports.com starting 20:00 (CAT) and delayed live on e.tv after the 20:30 (CAT) movie.