THE FUTURE OF THE FLYWEIGHTS 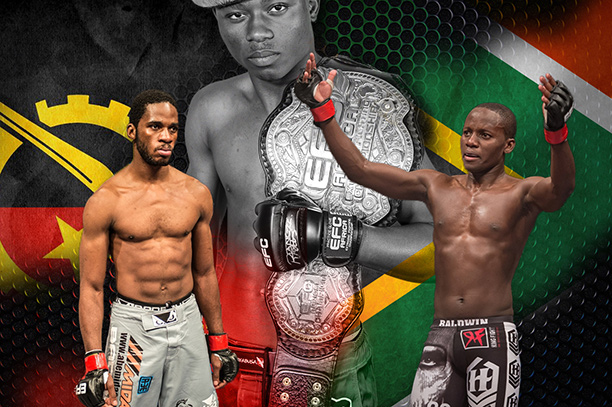 Johannesburg, South Africa – After the landmark event at Sun City takes place next Friday, EFC will return to Carnival City in JHB with a line-up which is simply massive.

Two EFC championships are on the line and the former champion, Scotland’s Danny Henry takes on South Africa’s Barend ‘BB Gun’ Nienaber all on the main card!

The news just received from the matchmaker’s office has just made EFC 51 even bigger. The addition of an official number one contender fight between Angola’s Marino ‘The Scorpion’ Cutendana and South Africa’s Baldwin Mdlalose has been included.

Marino Cutendana has been on an absolute tear since making the move to Team CIT in Pretoria. Riding four back-to-back wins at both bantam and flyweight, Cutendana has proved he belongs at the top of both divisions. With an eighty percent finish rate, Cutendana has won numerous performance bonuses for his first round finishes. The Angolan is looking to follow in his countryman, Demarte Pena’s, footsteps’ and create an Angolan stranglehold on the EFC’s two lightest divisions.

His opponent is the highly experienced Baldwin Mdlalose. Having fought two divisions up at featherweight, Mdlalose had mixed results. However, once he made the move down to flyweight he began to shine. Busy riding two submission victories over Jasen van Der Merwe and Jp Buys, Mdlalose is looking to put Durban back on the map. Fighting out of Domination Fight Gym, he packs a well-rounded game and has shown he can finish a fight from almost anywhere.

The champion who is eagerly waiting is Nkazimulu ‘Zuluboy’ Zulu. He made history last year in August by becoming the first EFC flyweight champion by defeating Craig Ninow via TKO in the first round. Zulu has remained unchallenged since capturing the title.

The number one contender fight takes place on the main card at EFC 51 on 15 July ahead of Leon Mynhardt vs Dave Mazany for the EFC lightweight championship and Igeu Kabesa vs Hanru Botha for the featherweight championship.

All this and so much more at the mega EFC 51 event.

EFC 51: Mynhardt vs. Mazany, Kabesa vs Botha takes place on Friday 15 July 2016 at Carnival City, Johannesburg. Tickets available soon at www.computicket.com, all the main card bouts will be broadcast live on kwesesports.com starting 20:00 (CAT) and delayed live on e.tv after the 20:30 (CAT) movie.