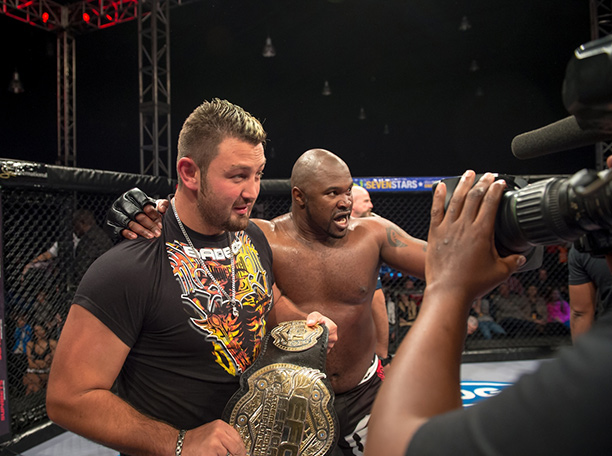 Sun City, South Africa – It is confirmed! After the successful landmark EFC 50 event was held at the ultimate destination, EFC is making its return to Sun City for EFC 54, and this time it will be smack in the middle of the weekend on Saturday 15 October.

Originally the event was set to take place in Durban, but due to the fantastic overall experience enjoyed by everyone in attendance at the sold out EFC 50 event, plus after the organisation was inundated with requests to return to Sun City, the planned event location has changed.

The event will be headlined by what could be the biggest stand-up war in the history of the organisation. Two of EFC’s heaviest hitters are set to collide! The EFC heavyweight champion, South Africa’s Danie ‘The Pitbull’ van Heerden faces the former African boxing champion, Zimbabwe’s Elvis ‘The Bomber’ Moyo.

Van Heerden claimed EFC gold in a splendour of violent glory with his TKO finish over former champion Brendon Groenewald. Leaving his opponent bloodied and incapable of defending himself, van Heerden’s hand was raised in Cape Town; having finally realised his dream since EFC 01. Now he is set to defend the belt for the first time, and prove he is the baddest man on the African continent.

His opponent, the former African boxing champion has become synonymous with KO and TKO finishes; having dropped most of the heavyweight division on his route to the top. A man with near perfect timing and the pin point accuracy, Moyo knows how to deliver fight ending punches in quantity. Coming off two spectacular finishes, most recently second round TKO over Ricky Misholas at EFC 50, Moyo always lives up to his alias of ‘The Bomber’.

Brother of the former world boxing champion Chris van Heerden, and with a family history of producing world class boxers, van Heerden is sure to have a point to prove when he stands in front of the boxing prowess of Moyo.

“Elvis is undisputedly the most exciting matchup for the champ, Danie,” stated EFC matchmaker Graeme Cartmell. He concluded, “Every MMA fan can imagine 240kg of intent, getting stuck into one another, head-hunting for the KO. That is the only way this fight is playing out and the type of heavyweight title fight I am so excited for!”

A massive fight for a massive event, full fight card and broadcast details to be announced soon on www.efcworldwide.com.

EFC 54: Van Heerden vs Moyo, presented by SUPABETS, takes place on Saturday 15 October at Sun City, North West. Tickets available soon at www.computicket.com, all the main card bouts will be broadcast live on www.kwesesports.com starting 20:00 (CAT) and delayed live on e.tv after the 20:30 (CAT) movie.