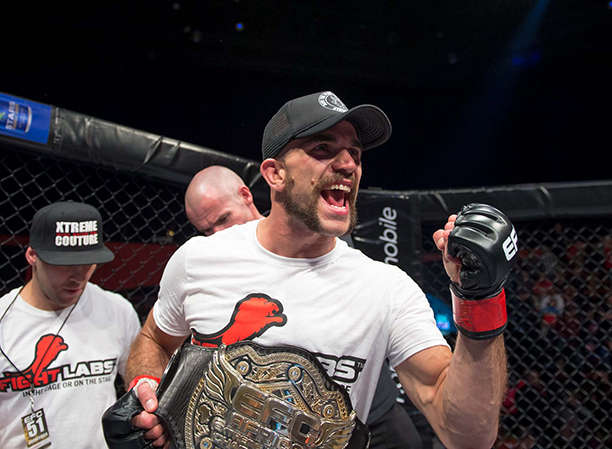 Mynhardt had dominated all in a championship reign lasting two and a half years, but hadn’t yet faced an athlete with the international calibre of the Las Vegas based ‘Pain Train’.

Mazany kept a cool head despite massive support for the local champion, turning Carnival City into a pressure cooker of animosity.

The bout kicked off at a furious pace with Mynhardt landing good, clean shots. He was unable to maintain the pressure however, and was steadily overwhelmed by the patience of the American, particularly after the fight went into the clinch.

After a ground scramble Mynhardt managed to return to his feet, but turned straight into the American’s waiting guillotine. Mazany cranked for all he was worth, forcing a tap from Mynhardt in the first round. The win completes a journey that began when Mazany faced former lightweight champion Wentzel Nel in a non-title bout five years ago.

“I knew it was in deep,” said a beaming Mazany after. “I want the fans to get online and tell me who they want to see me fight next. We fighters don’t exist without the fans. Thank you!”

Preceding the main event, Angola’s Marino ‘The Scorpion’ Cutendana faced South Africa’s Baldwin Mdlalose for the number one flyweight title contender shot. Both men have waged a long campaign to get to title contention, and both committed everything from the first bell. It ended quickly for Cutendana, falling prey to a huge overhand left and ground and pound from Mdlalose netting him a KO.

Henry impressed with calm control of the Hexagon, dominating a ground battle in round one. In the second he delivered two brutal body kicks that folded Nienaber, earning Henry a TKO victory. The victory puts Henry back at the top of the division, vying with H. Botha and Boyd Allen for a shot at the champ, Igeu Kabesa.

Local Gareth Buirski faced Brazilian Magno Alves, and both delivered a masterclass of Mixed Martial Arts. Alves, a BJJ blackbelt, impressed with precision take-downs and aggressive striking, but was unable to dominate. The action was close and it was a unanimous decision that finally gave the win to a seemingly unstoppable Buirski.

The night’s main card opened with the exciting prospect of South African Tumisang ‘The President’ Madiba against the Congo’s Anicet Kanyeba. The bout started at a furious pace, both men trading leather, but ground to an unexpected halt when a stray finger caught Kanyeba’s eye. The attending medical doctor judged Kanyeba unable to continue. The bout was called a No Contest, setting up a potential rematch at EFC 52, to be held in Cape Town on August 05.

Fight of the night honours went to the battle between Buirski and Alves. Performance bonuses were awarded to Danny Henry, Anicet Kanyeba and Tumisang Madiba.

EFC 52: Madge vs. Costa, Dalcha vs Maphutha, presented by SUPABETS, and takes place on Friday 05 August 2016 at GrandWest, Cape Town. Tickets are available at computicket.com.