SA READY TO TAKE ON THE WORLD 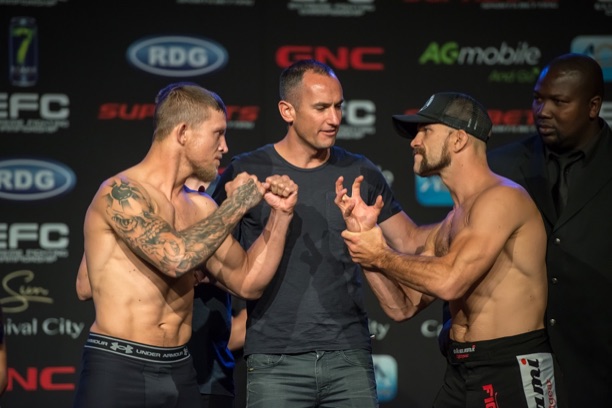 SUPABETS brings you EFC 51, this Friday live from Sun City!

Mazany is a born entertainer. He whipped off his shorts revealing a bright red speedo emblazoned with the words ‘Pain Train’ across the front and ‘Iron Claw’ across the back – a nod to his professional wrestling finishing technique. The gesture also carried a warning. Mazany first revealed the ‘Iron Claw’ to South African fight fans when he defeated former EFC lightweight champion Wentzel Nel, back at EFC05.

“I come in there ready to rock and roll. We are both tough SOBs,” drawled Mazany in a post weigh-in interview.

Notorious for little to no talk and big deeds instead, Mynhardt spilled some rare words of his own. “Fans can expect fireworks tomorrow night,” he bellowed above the cheering crowd. “I have put a lot into this, I have had two training camps for this fight.”

Preceding the main event, Angola’s Marino ‘The Scorpion’ Cutendana faces South Africa’s Baldwin Mdlalose in a flyweight bout. The right to challenge for the championship hangs in the balance, putting huge pressure on both men. Mdlalose missed his weight by a huge 1,5kg, leaving Cutendana visibly frustrated.

“I am going to knock you out,” screamed Nienaber. ‘Talk is cheap,’ replied Henry as they stood face-to-face, both men hunting a shot at EFC gold once again.

South Africa’s Gareth Buirski faces Brazilian Magno ‘Popeye’ Alves in his highly anticipated EFC debut. Despite being the shorter man, Alves stood strong as Buirski attempted to out-muscle him at their face-off. Just the second Brazilian to compete in the Hexagaon and one of a host of new signings, will he signal the start of the Brazilian take over?

Consummate showman Tumisang ‘The President’ Madiba (South Africa), faces the DRC’s Anicet ‘Showstopper’ Kanyeba to open the main card. Kanyeba is riding a four-fight win streak and hitting a personal best in breaking into the main card. Both were smiling until Madiba put a playful kick against Kanyeba’s chest, sparking a swing from Kanyeba, and setting up a bruising clash tomorrow night.

Their mood was a perfect example of the grim intent running through the main card, with all five fights featuring a South African against an international, and all with high championship stakes in play.

Four athletes failed to make weight: Conrad Seabi, Gareth Buirski, Danny Henry and Baldwin Mdlalose. All of which opted for a financial penalty instead of making their designated weights.

The full EFC 50 weigh-in results were as follows: