UK VS SA AT CARNIVAL CITY – TICKETS ON SALE NOW 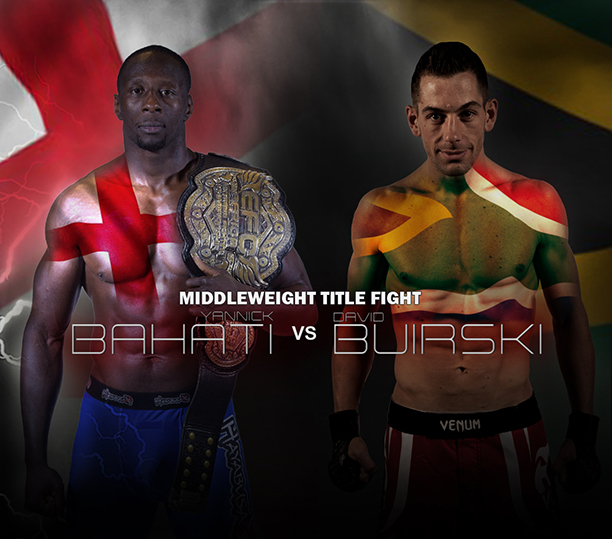 Johannnesburg, South Africa – Tickets for the upcoming EFC 53 event taking place at Carnival City on 2 September are on sale now at www.computicket.com.

Two of the world`s top sports nations are set to collide in combat. South Africa`s most dangerous mixed martial artists are taking on the champion from the UK and more of the United Kingdom`s best.

The EFC 53 event, UK versus SA is headlined by the EFC middleweight title clash between the English champion, Yannick Bahati and the challenger, South Africa`s David Buirski.

Bahati claimed the EFC middleweight championship in May this year by defeating South Africa`s JP Kruger with a phenomenal display of submission wrestling. He now faces a monstrous task in his first title defence, as he goes head-to-head with the man who made history by becoming the first and only person to ever win and successfully defend the welterweight title.

David Buirski is still unbeaten since becoming the welterweight champion and has relinquished his title to move up to the heavier division to challenge Bahati.

Both athletes bring a well-rounded arsenal, with KO ability and submission skills that have seen them finish the majority of their previous opponents.

More bouts featuring the top fighters from the two great nations will be announced soon. It`s the clash of two nations. Don`t miss it!

EFC 53: Bahati vs. Buirski, UK vs. RSA, presented by SUPABETS, takes place on Friday 2 September 2016 at Carnival City, Johannesburg. Tickets are on sale at www.computicket.com, and the 5 main card bouts will be broadcast live on www.kwesesports.com starting at 20:00 (CAT) and delayed live on e.tv after the 20:30 (CAT) movie.