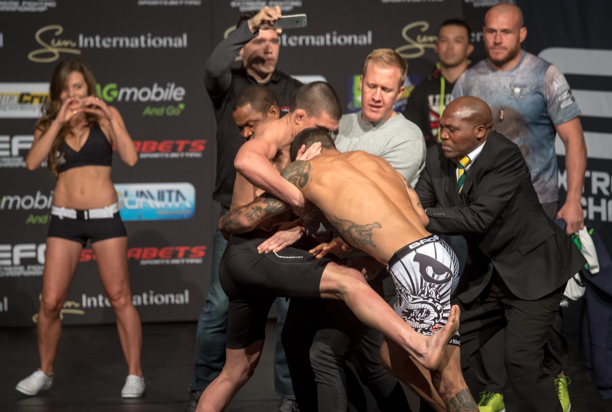 Don Madge and Jadyson Costa clash at weigh-in ahead of EFC 52.

Cape Town, South Africa – The most intense weigh-in in EFC history took place at GrandWest Market Hall this afternoon ahead of the EFC 52 main event tomorrow.

The event is headlined by Cape Town’s Don ‘Magic Man’ Madge as he takes-on his former mentor and coach, Brazil’s Jadyson Costa, in one the biggest grudge matches in the organisation’s history.

The tension was palpable as the two outspoken athletes stood face-to-face after hitting the scale. Once in front of each other, Costa’s emotions got the better of him and he shot for a takedown on stage. After being separated by security, the scene is set for all out warfare tomorrow night in the GrandArena.

In the co-main event, DRC’s ‘Champion’ Dalcha Lungiambula faces South Africa’s Tumelo ‘The Truck’ Maphutha for the interim light heavyweight championship. Both athletes imposed themselves as they stepped onto the scales and when they faced-off on stage, the room echoed with Lungiambula’s notorious following bellowing chants from the stands.

DRC’s Bruno ‘Major’ Mukulu faces South African MMA legend Wade ‘Wendo’ Henderson as he seeks vengeance and retribution against the South African from when they first met several years ago. Mukulu has shown to be a dangerous threat to the best in the organization and is now looking to build his momentum towards a title shot.

Also featuring on the main card sees the ever entertaining Tumisang ‘The President’ Madiba taking on Judo blackbelt Sindile Manengela. Having recently made the move from Johannesburg to Cape Town, Madiba is on a mission to put on a show for his new hometown.

Opening the main card is fan favourite and all-action fighter, Sibusiso ‘The Monster’ Mdoko, who takes on Saxon ‘Saxbomb’ Delafield. Both men are known for their aggressive styles and are sure to set a high standard to kick off the main card.

Saxon Delafield failed to make the lightweight limit and opted for a financial penalty.

The full EFC 52 weigh-in results were as follows:

EFC 52: Madge vs. Costa, Dalcha vs. Maphutha, presented by SUPABETS, and takes place on Friday 5 August 2016 at GrandWest, Cape Town. Tickets are on sale now at www.computicket.com, and the 5 main card bouts will be broadcast live on www.kwesesports.com starting at 20:00 (CAT) and delayed live on e.tv after the 20:30 (CAT) movie.