FORMER CHAMP IN THE SIGHTS OF THE FUTURE STAR 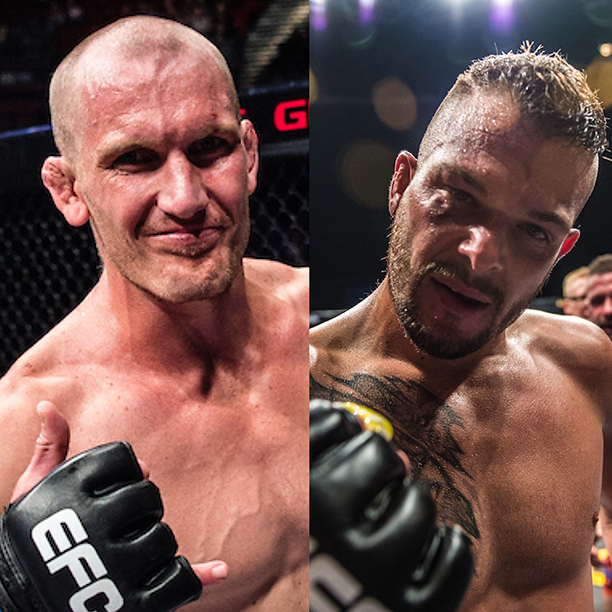 Cape Town, South Africa – One of the most well-known and longest standing names in EFC is set to make his return to the Hexagon after over a year long layoff. The former welterweight champion, Dino ‘The Lion’ Bagattin, is confirmed to face the undefeated rising star, Cameron Pritchard in Cape Town at EFC 55 in November.

A protégé of South African MMA legend Chris bright, Port Elizabeth’s Pritchard is undefeated in the welterweight division and carries a one hundred percent finishing rate. Notable for his technical grappling and submission prowess, Pritchard also holds a KO finish over kickboxer Pupanga Tresor. If he manages to notch up another straight win over another one of the organisation’s best, it will undoubtedly put Pritchard into title contention and en-route to being Port Elizabeth’s first ever champion.

Pritchard sustained a knee injury in his fight against Francois Kabulu and has been out of action for just under a year. He feels he still at the top of the division. “This is my first fight back after knee surgery,” stated Pritchard. “I felt I left at the top before I had surgery. So this fight is getting me back to my title chase.”

Pritchard does not have an easy task in front of him. Bagattin has been fighting in the Hexagon since EFC 01. He has faced the very best and come out on top on numerous occasions. The highlight of his courier saw the Johannesburg local claim the EFC welterweight title by defeating the formidable Michiel Opperman. Now full time training at Fight Fit Militia in Johannesburg, Bagattin has honed his craft on the ground to compliment his world class Muay Thai skillset.

One of the most experienced EFC athletes, Bagattin last fought at EFC 40 over a year ago. “I have been going through some personal issues and family tribulations, but I have been in the gym training day in and day out. The support of my teammates and coaches has been phenomenal and I am looking forward to getting back in the Hexagon and doing what I do.”

When asked if he thinks the time off has affected him at all he responded, “Being out for so long, I feel like Richie has been remolding me, but I am still going to come out and fight like I always do. Fans will see a more rounded athlete; they will see a polished hungry ‘Lion’. My striking is more devastating, I am bringing my kicks back and I still love elbowing the snot out of people.”

“I wanna prove I am still one of the best fighters on the continent.” Stated Bagattin when asked what this fight means to him. He echoed this sentiment further, ”I want to show that I am one of the pioneers and founders of MMA in South Africa and show how far I have come from just a striker to a full Mixed Martial Artist.”

When asked if he has anything to say to Pritchard he responded, “Watch as many videos of my old fights as you want. Prepare for the old ‘Lion’, but you will be facing a new ‘Lion’.”

EFC matchmaker Graeme Cartmell is resolute on the importance of this fight, “In my mind there are four welterweight contenders: Fadipe, Pritchard, Hulme and Gorimbo. Both Hulme and Gorimbo did not want to take the Fadipe fight, at this point in time, to create a true number one contender. Pritchard is the man to watch now with his fight against Bagattin!”

Will EFC Cape Town produce a new welterweight superstar in Pritchard and pave the way for him to have his shot at gold, or will the veteran of the Hexagon use his guile and experience to shut down the rising star? The welterweight champion, Dricus du Plessis waits.